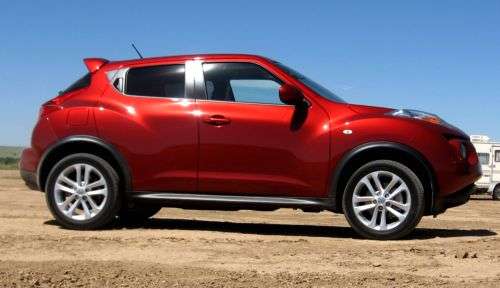 RMDE I: The Colorado Off Road Experience

Over the last two days, June 15-16, the Rocky Mountain Automotive Press hosted the second annual Rocky Mountain Driving Experience, bringing Western and regional automotive media together with numerous manufacturers and examples of their model lines in the unique environments Colorado can provide. Consisting of off-road, racetrack and even motoring up the highest paved road in North America, the second event was an unqualified success.
Advertisement

After convening at the DIA Holiday Inn, the members of the media broke into two groups and selected vehicles from those provided by the manufacturers for the 40-mile jaunts to either Colorado Off Road Extreme (CORE) or High Plains Raceway (HPR) for further vehicle trials.

The 800-acre CORE facility is an off-road park providing a legal, private and controlled environment for trucks, SUVs and other four-wheel-drive vehicles. It includes a high-speed rally circuit, mud bog and rock-crawls among other challenges. The higher speed rally course with its bumps, turns, muddy spots and undulating straight-aways is by far the most entertainment readily available in an all-wheel-drive vehicle.

The 201 Kia Sportage SX features a 2.4-liter 4-cylnder, turbocharged engine developing 260 horsepower and an electronically controlled six-speed transmission with overdrive. The Sportage handled the rally circuit as though made for it, delivering excellent acceleration in the straights and surprisingly tight handling in the corners and curves, smoothing the larger bumps in the process. This is attributable to the MacPherson struts in front and the multi-links in the rear coupled to gas shock absorbers all around.

The 2011 Subaru Forester AWD was the least surprising as we’ve long known this model to be well suited to not only this, but also many different kinds of Colorado terrain. It simply affirmed it hasn’t lost its edge over the years. It gets 21-mpg combined and outdoes the Kia in emissions, managing a combined score of 10 out of 20 in greenhouse gasses and particulates.

But another surprise was the Audi Q7 3.0T S line Quattro Tiptronic, which we never expected to see on the rally course. This small SUV has a 3.0-liter supercharged FSI direct injection engine developing 333 horsepower coupled to an 8-speed transmission. It traveled through the rally course with verve and veracity, driving and handling like a much smaller car in a not so small SUV body. Twenty-inch wheels not doubt contributed to that fact and the remarkable six-piston in front and four-piston rear ventilated disc brakes should be noted. In short, the 2011 Audi Q7 provides power, performance and stopping power in a perfectly pleasing package.

That said, by the far the vehicle that was most fun to take around the course was the funky little 2011 Nissan Juke SL AWD. The eclectically shaped little car was born for this sort of off-road rally course, eagerly climbing up short inclines and easily swinging through the curves. The short wheelbase riding on 17-inch aluminum alloy wheels makes the Juke nimble while the 188 horses of the 1.6-liter turbocharged four-cylinder with CVT is rearing to go. The up-to-date suspension allows it to deliver on its promise and disc brakes, ventilated in front let it pull up short whenever needed. It delivered an exhilarating trip about the off-road circuit.

We only took one vehicle through the 4X4 course, picking the sheer essence of all-wheel-drive luxury SUVs, the Range Rover HSE. There’s a reason Range Rovers are use to protect the Queen and the HSE happily demonstrated its rock crawling and steep incline climbing acumen. The Range Rover was the first to offer adjustable height, terrain suspension and drive control – these systems just continue to improve.

A couple of the pickups provided for the 4X4 exercises managed to teeter themselves, high centering on steep point crossings – not a fault of the truck but rather a function of the wheelbase length. The Ranger Rover had no such problems. The Range Rover HSE is the car for those who long to go on safari, whether it’s from the suburbs into the urban jungle, from the front range up to the slippery ski slopes or to the jungle of Costa Rica overland. It will get you there across most any terrain in comfort and with a bit so stylish verve.

Next up: Racing around High Plains Raceway – RMDE Part II