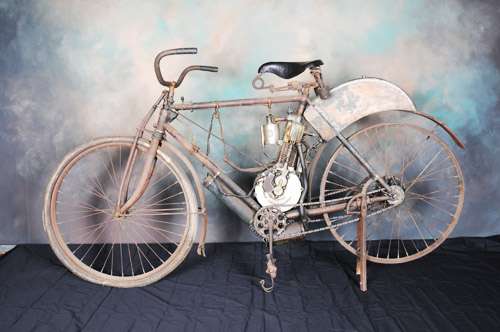 An original 1903 Indian Motorcycle going to auction this week

Indian Motorcycles were the first made in the U.S., initially sold to the public in 1902, making this unrestored 1903 Indian Motorcycle absolutely the oldest known example of its kind.
Advertisement

Other than a few nuts and bolts that were changed out for early repairs, this motorcycle is essentially in the same condition it left the factory. It hung on the wall of a dentist’s office for 30 years and then languished in a garage and finally a basement for many more.

"This motorcycle predates the Harley - the bike most Americans associate with homegrown motorcycles," explained Steve Rinker, who runs Buck's Indian, an Indian motorcycle restoration firm in Romney, WV. "The handful of 1902 Indian models that were built were deconstructed, their parts used to build the 1.75-horsepower 1903 models. And as far as we know, this is the only unrestored 1903 still in existence."

Production of Indian Motorcycles didn’t surpass 500 units until 1904, so this 1903 original Indian Motorcycle is indeed a rare find. A single cylinder engine powered the bike, which in the year of its manufacture set a world motorcycle record by going 56 mph. It even predates the red color early Indian models were know for by one year.

"What makes this bike particularly intriguing is that it's never been restored. Except for a few nuts and bolts used for early repairs, this bike is all original," added Josh Ruby, the auctioneer entrusted with selling the motorcycle for the Alder estate. "And I do mean 'bike.' This is one of the most primitive motorized vehicles you'll ever see - a real peek into what innovation looked like over a hundred years ago."

The classic motorbike has traveled more over the last year than it did for the preceding 90 years , although it was riding in the back of a van. "It was a hit at Daytona," said Rinker, who is also an owner of a private museum of antique motorcycles and has been storing the bike until the auction.

We called Steve Rinker to see if he had ever ridden one of the bikes of this era and he said he hadn’t, but mentioned someone who had.

Dale Walkster, Curator to Wheels Through Time Museum, rode one in the Race of the Century in the Barber Racetrack in Maggie Valley, NC. All the competitors had to be on motorbikes at least 100 years old. It included the oldest Harley Davidson in the world still running and several of the oldest Indians. Walkster won riding the restored 1903 Indian.

“Most of these things are fully restored and have never had a drop of gas put back in them,” Rinker told Torque News. “It’s just the same with this old bike that’s going to be sold Saturday. It would be a shame if somebody took it and added back to it what it needed – like new wires and a battery – to get it running. It would be awesome to hear it, but kind of a 50/50 deal. Do you leave it set or get it running. Even if you do get it running, you’re not going to ride it anyway.”

Multiple pre-1930 Indian and Harley Davidson motorcycles and even a sidecar will be on the auction block with the 1903 Indian model. Ruby doesn’t even know what to expect in the bidding, but said the item has generated a lot of media interest. "This motorcycle hasn't been sold since the 1950's,” he said. “The last time it changed hands outside the family was during a barter for $50 of construction work by Charlie's dad - before the bike was considered to have collectable value. So, it will be exciting for all of us, as those bids come in."

The auction will also include 1940's automobiles, World War II memorabilia, and antique railroad items - over 900 lots of collectible antiques in all. Online bidding is available via proxibid.com.

Meanwhile, check out Dale Walkster riding one of the fastest motorcycles of its time, the1903 Indian in the following video.