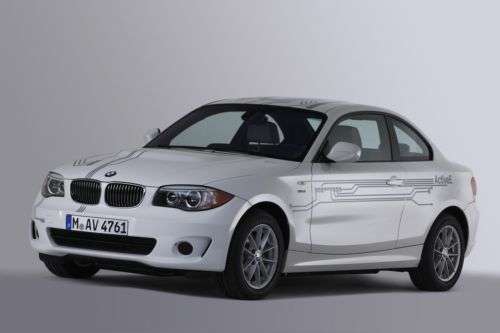 Now you have seen it all: an Electric BMW

BMW makes Mini Coopers, so technically it’s not the first electric “BMW.” Nevertheless, just take a look at the other electric cars on the market. Chevy’s Volt, Nissan’s Leaf, the coming electric Focus, the planned Volvo entry - they are all small cars! Though this is no mid-size sedan, it is based on the BMW 1-series coupe and carries a truckload of technological advances we would’ve thought still a few furlongs down the road to the future.
Advertisement

Who knows? Maybe Dr. Emmett Brown and Marty McFly took the DeLorean back to Beamerberg with a backseat full of future tech.

“The ultimate goal is the concept of a Megacity Vehicle (MCV) that meets the demands of sustainable mobility for congested urban areas,” states the press release. “The drive components and battery technology that will be used in the MCV are being tested in the BMW ActiveE.”

This model builds on the company’s work with the Mini-E, 600 of which are in testing worldwide, 450 in the U.S. alone.

During this year, a test fleet of over 1,000 ActiveE BMWs will be deployed in the U.S. Europe and Asia, serving to expand the total knowledge of the performance and demands of an electric car.

The feedback from customers testing the MINI E and the BMW ActiveE will inform series production of the MCV, which BMW will launch under a new sub-brand in 2013.

The ActiveE will produce 170 horsepower and have a full charge range of about 100 miles. It will feature four full-fledged seats and a 7 cu. ft. trunk, which might be enough room for your golf clubs – certainly enough for the groceries.

Remarkably, the entire power pack, including power electronics and transmission with differential, is integrated into the modified rear-axle support of the BMW ActiveE, and with 170 horsepower, it still has a total weight of only around 200 lbs.

Another noteworthy innovation, unlike other electric vehicles, the BMW ActiveE features a distinctive intermediate position of the accelerator pedal, allowing the vehicle to “glide.” As a result, when the driver decelerates it “de-clutches” using the electric motor’s zero momentum control and kinetic energy to move forward.

The vehicle uses high-voltage, large format batteries jointly developed by the BMW Group in collaboration with SB LiMotive exclusively for automotive use.

The large battery unit of the BMW ActiveE takes the space in the lower area of the vehicle normally intended for the drivetrain. The space at the rear where the fuel tank used to be also accommodates additional storage cells. More lithium-ion cells are located at the front end in front of the cowl.

All the batteries are contained within a steel-plated housing which is liquid cooled maintaining the optimal temperature for battery function and life. The climate control regulates the temperature of the liquid and when recharging the temp is raised to the desired level of 70° Farenheit.

A full charge requires a four to five hour plug into a 32-amp wallbox installed in the owners home. After a one-hour charge, however, the car has a 25-mile range.

Reportedly, the suspension has been tuned to handle the added weight of the electric drive system so the vehicle performs up to the specifications of a BMW.

The BMW ActiveE will have its U.S. coming out at the New York Auto Show in April. It will be available for lease in certain markets this fall.