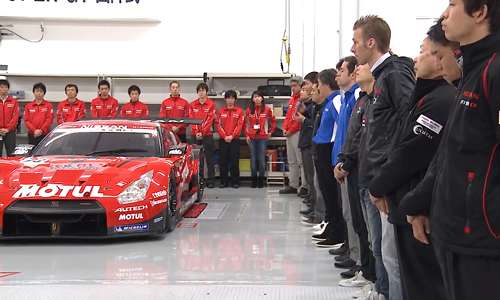 It’s part of the annual ablutions for the NISMO racecars in the Super GT circuit in Japan and today the cars were blessed in a ritual dating back thousands of years.
Advertisement

During the winter off-season, the cars have been put through their paces, their diets refined and their weight considered ounce by ounce. When it’s time to leave their winter quarters, one ritual remains before these road warriors attend the first race of the Super GT season - they must be blessed.

The modern world of high-speed racing is such that you not only need the best engineers, technicians and drivers on your side, but also the ancestral gods of the Samurai Warriors.

Hey, what's it going to hurt?

In preparation for the blessing, NISMO's president Shoichi Miyatani went to a Shinto shrine in Tokyo, early this morning, to collect sacred sake. At the NISMO racing headquarters, the entire workforce gathered – the drivers, pit mechanics and staff to await the solemn ceremony.

They provided rapt attention as sake was poured over the hood of No. 23, in the ancient ritual of Shutsujin-shiki, (Departure for the Front ceremony), echoing the manner of past centuries, when samurai were sent to war across Japan.

"At that time just before they went into battle they wished and prayed for the safety of all the people and winning," said Miyatani. "This is a good opportunity for all the employees of NISMO and the team directors and drivers to get together and feel united as one and go for winning."

The divine supplication seemed to work the last couple of years, as Ronnie Quintarelli along with co-driver Masataka Yanagida won their second successive championship in the S Road REITO MOLA GT-R.

The pair will drive the NISMO works car No. 23 and are hoping for continued success.

J.P. de Oliveira will be racing in the Calsonic Impul GT-R.

"I'm excited," he said. "We haven't raced in a while. I love to race. Testing is one thing but racing is when things get really serious, and you need to focus on the result. I've been looking forward for the first race. Okayama is a track that I like and I can't wait to get in the car and do the qualifying and the race there."

Of course, once the ceremony is over, the engineers quickly clean the sake off the hood for fear it could tarnish the paint. Then the cars are loaded onto a truck along with the tools, equipment, spares, etc. needed for the long journey to the Okayama racetrack, where the first circuit race of the season will be hosted in Western Japan.

Ladies and Gentlemen, start your engines – and toss back a shot of sake in NISMO’s honor.