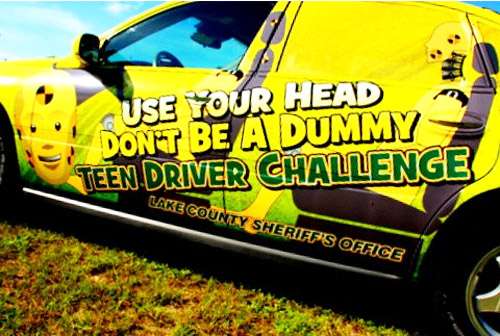 Attention Deficit Hyperactivity Disorder (ADHD) makes just getting through darkest adolescence troubling enough, but takes on nightmarish potential when teens with the disorder begin to drive the family car.
Advertisement

We already know teen drivers are easily distracted by friends, phones, pets and/or music, but a teen driver with ADHD is already distracted by the condition itself. Just analyze the words and it spells out “distracted and panicky.” They even have trouble with a parent or instructors verbal directions unless they are very calmly and slowly delivered with great deliberation.

So what’s a poor ADHD teen driver to do?

In the New York Times this week, Jillian Serpa revealed how her first attempts at learning to drive the family car, ended with the vehicle straddling a creek next to her home in Ringwood, NJ.

She had become flustered trying to comprehend the directions her father was giving as she started to back out of the driveway. There was a consequent misunderstanding of instructions. "I stepped on the gas instead of the brake," Serpa said.

Learning to drive is scary for a good many teenagers and driving is one of the most dangerous things teenagers ever do. However, it’s even scarier and more confusing for teens like Serpa, who have ADHD.

Though just one of many cognitive disorders that can affect driving, ADHD has been the most thoroughly researched. The New York Times quoted a 2007 study, by researchers in Virginia and South Carolina, concluded teen drivers with ADHD are two to four times more likely to have an accident. They essentially have the aptitude equivalent of a legally drunk adult.

In a paper titled Teen Drivers With AD/HD: Realities and Risk Factors, Marlene Snyder, Ph.D., states “The risk for motor vehicle crashes is higher among 16 to 19-year-olds than any other age group.” Automobile crashes are the leading cause of serious injury and death among American teenagers, according to the Insurance Institute for Highway Safety.

The professor has posted three different articles on the subject on greatschools.org and notes part of the problem is the ambient teen attitude that states, “I’m invincible,” or “It can’t happen to me.” Driving is a complex skill set even harder for the kid with ADHD.

Though they know it is important to safety, only 33 percent of high school students report they always wear seat belts when riding with someone else

Lack of driving experience, immature judgment, and the characteristic teenage "risk taking" attitude are obstacles to safe driving that all parents of teenagers should be concerned about. Driving safely is a complicated skill that takes time and practice for any teen to master. At the same time, the common teenage attitude that "nothing will happen to me" creates a situation where teens are more likely than older, more experienced drivers to underestimate the dangers in hazardous situations. For example, even though most teenagers understand that wearing seatbelts is important for safety, according to a report from the Centers for Disease Control and Prevention.

ADHD Increases Driving Risk
Studies indicate that teen drivers with ADHD have abnormally high rates of traffic violations, accidents and instances of driving without a license. Another study of 105 teen drivers with ADHD found 20 percent had their license suspended or revoked – another fifth had received 12 or more traffic citations or caused over $6,000 in damage in their first crash.

Of course many modern doctors think a pill is the answer to every medical condition or cognitive disorder. One such approach was found on Empoweddoctor.com.

Alison O’Brien has been on medication for ADHD since she was six years old. When younger, she didn’t always remember to take it. That has become a problem now that she’s starting to drive.

“As I was coming down (the street), I saw another car coming at me and he tried to move into my lane because I was in his lane and we both went head on into each other,” O’Brien said. “That day I actually forgot my medicine so I was really unfocused and I couldn’t really drive very well.

In this case no one was seriously hurt but the car was totaled.

Taking the medicine may have helped, however a new, if limited-scope study finds the long-acting medicine, concerta, significantly improves a teen’s ability to operate a vehicle compared with short acting multiple daily dosing of medications such as ritalin.

“The study was interesting, but it looked at only nineteen kids so it is a great start. It is not necessarily that we would have them change from medicine A to medicine B or short acting medicine to long acting medicine, but we would take a look at their treatment plan. Whereas, when you were in fifth grade you needed to concentrate from 9 am to 3 pm to get through homework. Now you are in the twelfth grade and so you need to concentrate in school, but also need to be super focused on the road because a car is a potentially dangerous thing,” said Dr. Kurtz.

“I definitely knew it was due to the fact that I hadn’t taken my Concerta that day, so had I taken it I would have been probably fine,” O’Brien added. “It has taught me to never forget my medication and if I do forget it to go back home and do anything I can to try and get it.”

According to Dr. Kurtz, most teen drivers actually do well at the start, during what you might call a honeymoon period, but then the accidents begin, especially with the kids with ADHD. He recommends not being fooled by an early record of success. Watch the kids closely after their first few months driving, and be sure to reinforce safe driving behaviors.

It’s not just for them, but for everyone.