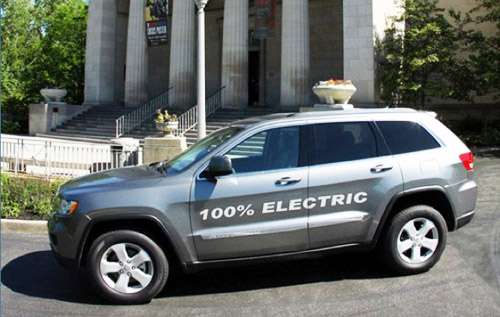 The company that surprised everyone in 2010 with a plug-in version of the Chevrolet Equinox, Amp Electric Vehicles, will reveal an electrically powered Jeep Grand Cherokee at the 2012 North American International Auto Show (NAIAS) next month.
Advertisement

The Ohio-based company made the announcement today that it would bring a converted Grand Cherokee to the Detroit auto show, release final pricing information and name their first retailer.

Reportedly, company president Steve Burns told Joe Motavalli, of The New York Times, the modified Jeep model would cost about the same as the Tesla Model S, currently the most advanced electric sedan priced at $57,400 – not counting the $7,500 federal tax credit. Amp’s electric Grand Cherokee, utilizing a 37-kilowatt-hour battery pack, can travel about 100 miles on a full charge, according to Burns.

Though it is not likely Tesla buyers would be interested in a Jeep, Grand Cherokee buyers might be fascinated with an electric option. AMP plans to market the conversions to fleet managers, banking on its ride height and optional four-wheel drive to win them over.

“By definition, fleet buyers aren’t risk-takers, and they can have a high comfort level dealing with a known brand like Jeep,” said Jim Taylor, chief executive of Amp. So the company is counting on the likelihood these buyers will elect to go with something familiar that has been updated rather than a relatively unknown product.

Apparently they ceased producing conversions of the Equinox due to lackluster enthusiasm on the part of GM. “We got no love out of GM,” Taylor added. “Chrysler answered the phone when we called for the first date.”

Notably, Chrysler seems to be lagging behind the other big manufacturers when it comes to the development of hybrids and electric vehicles, possibly explaining their interest in a partnership with AMP Electric Vehicles.

The Jeep Grand Cherokee shares some genetics with their other electric modification of the Mercedes-Benz M-Class SUV. “They’re cousins underneath, built on the same platform and that meant we could use identical drivetrains,” Burns stated. “We didn’t have to replace a nut or bolt.”

According to Taylor, the company is lessening their focus on low-volume customer car conversions and going after large-scale electrification of existing fleets instead. The company is currently trying to interest delivery giants like FedEx and UPS. “The equation is they could buy a new gas-powered step van for $30,000, or spend the same amount of money to convert an existing vehicle to electric power,” he said.

Last May, Amp announced it had reached an agreement with Northern Lights Energy to market electric vehicles in Iceland, but the deal is on hold, awaiting legislation that would dismantle duties on imports of this kind.

The video below shows AMP techs converting a Mercedes SUV to electric, test driving it and then apparently outracing a gasoline-powered model of the same type.