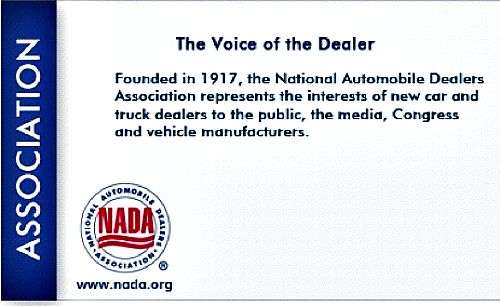 The National Automobile Dealers Association (NADA) efforts to delay the new fuel efficiency and auto pollution standards have prompted the leaders of eight top U.S. environmental, science and public interest organizations to drop its opposition. According to the directors of these organization, the standards will save billions of dollars, curb pollution and create new jobs while cutting America's oil dependence.
Advertisement

The organizations have all signed a joint letter to NADA President Philip Brady insisting he end opposition to CAFE requirements for 2017-2025. Pursuant to an agreement between the Obama administration, California and major automakers last summer, the standard are broadly supported by the industry, labor, and public interest entities. Despite its clear benefits, NADA is the only organization still lobbying policymakers to block the implementation of these standards.

"These standards are supported by major automakers, the United Auto Workers, California and other clean car states, and numerous consumer, environmental, business and national security organizations. By continuing to oppose these standards, NADA is trying to sell Congress, dealers, and the American people a lemon," states the letter from CEOs of the Natural Resources Defense Council, the Sierra Club, Environment America, the Safe Climate Campaign, the Union of Concerned Scientists, all members of the Go60MPG coalition, as well as the CEOs of the Coalition for Clean Air, Clean Air Watch and Energy Independence Now.

"Delaying these standards will only force Americans to pay more at the gas pump, jeopardize new jobs and investments, put the health of our communities at risk from increased pollution and continue America's dangerous dependence on oil," they conclude.

Read the letter in its entirety here.

According to these groups analysis of the new standards, they will reduce oil imports by 1.5 million barrels per day by 2030 – the amont the U.S. imported from Saudi Arabia and Iraq last year. The standards are further expected to create 500,000 new jobs in the auto industry and the general economy.

They’ll save American consumers over $44 billion in 2030 alone – even after retiring the cost of fuel-saving technology and simultaneously clear the our air by keeping 280 million metric tons of greenhouse gasses from becoming part of our atmosphere in 2030 alone.

Beyond the letter to NADA, roughly 20,000 concerned individuals have sent messages directly to dealers to get them dedicated to cleaner, more efficient cars. If If interested you can consider their campaign by clicking on one of the following organizations: The Sierra Club, the Union of Concerned Scientists or Save Our Environment .

Go60MPG is a joint effort of Environment America, the National Wildlife Federation, Natural Resources Defense Council, the Safe Climate Campaign, the Sierra Club, and the Union of Concerned Scientists. American ingenuity can make all-new cars and trucks cleaner and more fuel-efficient. It's one of the biggest steps America can take towards saving money, cleaning the air and ending America's oil dependence. So Go60MPG is rallying public support to raise fuel efficiency standards for new cars to at least 60 miles per gallon and no more than 143 grams per mile of carbon pollution by 2025.