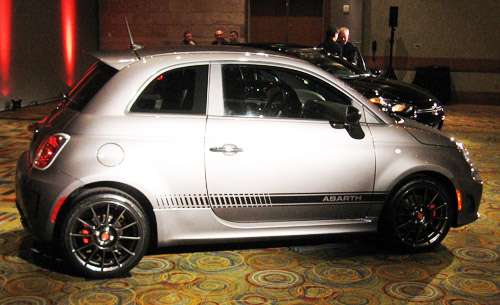 Turbochargers are both quietly and vociferously changing the vehicles on the roads of today, as more and more cars, like the 11 models with EcoBoost engines coming from Ford this year, as well as top sellers like the Chevy Cruze and Sonic come off the showroom floor with this option built right in.
Advertisement

Honeywell places the number of turbocharged commercial and passenger vehicles in North America at 3.2 million in 2012, up from 2.2 million last year. Passenger vehicles alone will account for nearly 850,000 additional turbo engines – a 61 percent jump since 2011.

"With fuel prices being a significant concern for consumers and businesses, turbochargers are a smart choice for getting more miles to the gallon," said Tony Schultz, vice president for the Americas, Honeywell Turbo Technologies. "It's a proven technology that can be used across market segments and does not put the consumer in an extended payback period like other technologies to realize its benefits. Turbocharging technology has been a fuel economy driver for decades in the United States for the on and off-highway commercial vehicle market, as well as in global passenger vehicle markets like Europe."

Large 8-cylinder engines have steadily declined since 2008, while a corresponding increase in 4-cylinder engines follows the U.S. move to smaller engines with turbochargers thanks to high gas prices, according to J.D. Power and partner firm LMC Automotive.

Back in 2008, turbochargers were only present in 2 percent of gasoline or flex-fuel vehicles built in the U.S., but that statistic jumped to 9.5 percent during 2011 and is expected to more than double to 23.5 percent by 2017, LMC Automotive projects.

The EPA has recently pointed to turbocharging as the main technology explaining "the improvements in CO2 and fuel economy during the last seven years" with more efficient and smaller engines.

Smaller turbocharged engines can deliver from 20 percent to 40 percent greater fuel efficiency with performance equivalent to a larger engine. Measured trends indicate the downsizing is ongoing as the average engine in North America is shrinking from 3.6L in 2007 to a projected average of 2.9L by 2016

Many of the best-selling vehicles in the U.S. so far this year, such as Ford's EcoBoost lineup and the Chevrolet Sonic and Cruze, offer Honeywell turbocharged engines. Many such vehicles can produce 40 miles per gallon or better in highway driving and have starting prices below $20,000.

Maybe there is a cure for the Summertime Blues, after all!

Honeywell launches approximately 100 new turbo applications globally each year. Currently, they have more than 500 programs with virtually every major manufacturer in their product development line.

The 2013 Dodge Dart, coming later this year, will feature a fuel-efficient Honeywell turbocharged engine, not to mention the Fiat 500 Abarth and diesel models of the Chevrolet Silverado and Volkswagen Touareg.

It’s rapidly becoming a turbocharged world and we have Honeywell to thank for it.