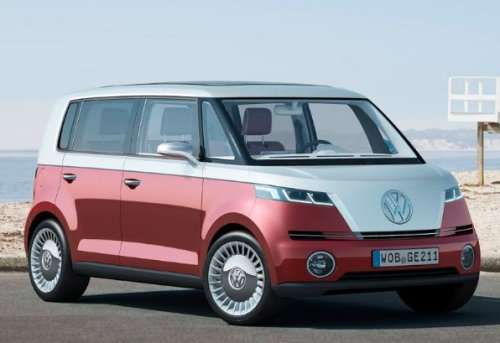 The Microbus reincarnated - the VW Bulli comes out in Geneva

The world's first van was invented in 1950 and called the Microbus in America and the Bulli in Europe. That design elicited a cult following worldwide that still exists today. Whether the Microbus with a 21st Century makeover will still strike a major chord with buyers around the world remains to be seen.
Advertisement

There’s a fair chance it will, however, thanks to it’s appeal to a new sub-culture of car buyers – those embracing the Age of the Electric Automobile (or van in this case).

It has taken Volkswagen 10 years to achieve this considerable achievement in vehicle design. The project was begun in 2001 and took this long because its predecessor left big shoes to fill.

It was one of those iconic designs that just never died – despite the consumer advocate who made himself a household name by attacking the gentle Microbus and other vehicles. Of course, we’re referring to perennial presidential candidate Ralph Nader.

Fortunately, the new VW Bulli has had 50 years of automotive research and development to work with and the results are fairly impressive.

The Bulli being shown in Geneva has an electric motor that produces 85 kW of power and 199 lb.-ft of torque from a standstill. The nearly silent motor gets its power from a lithium-ion battery with a storage capacity of 40 kWh, providing a range of up to 186.4 miles.

When the Bulli's battery is charged at a specially designed EV power station the process takes less than an hour.

The new Bulli will accelerate from 0 to 62 mph in 11.5 seconds with an electronically governed top speed of 87 mph. Its range makes it ideal for short trips and commuting but great also for many commuters and recreational activities with zero greenhouse or particulate emissions.

That's quick enough for the average freeway on ramp, but might create a little stress in the shorter merge lanes.

The concept can also incorporate Volkswagen's efficient gas and diesel direct injection engines as alternative drives – smaller engines with 1 to 1.4 liter displacement that are strong yet fuel-efficient.

The new edition of the Bulli is not as long or tall as the Microbus but wider and better balanced. It is 156 inches long, 68.4 inches wide and 66 inches tall. The van has a wheelbase of 102 inches and a track width of 54 inches.

It keeps the two-tone paint scheme and the front end V shape is flattened on the aforementioned diminutive hood.

It will be interesting to see how the crowd at Geneva greets this pretender to the Microbus throne – will it be a new rockstar or just one more new face in a crowded field of consumer choices.

At least in the electric model, its heart is in the right (and very hip) place.

Only time will tell.