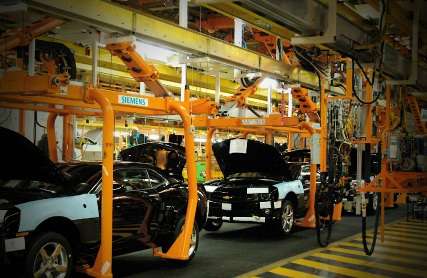 Orders to U.S. manufacturers of both autos and aircraft are up as 2012 begins along with factory payrolls and hours worked while unemployment has dropped to its lowest level in three years, according to a report released by the Commerce Dept.
Advertisement

“Manufacturing is doing quite well,” said Michael Brown, an economist at Wells Fargo Securities LLC in Charlotte NC, according to Alex Kowalski’s post on Bloomberg Business Week. “Going forward, the year is off to a decent start in the manufacturing sector, but we need to make sure that orders continue to come in with the strength that we’ve seen in the last couple of months.”

A survey of 64 economists’ forecasts of factory orders conducted by Bloomberg News projected a rise of 1.5 percent, based on the median of the responses, which ranged from estimates of a 1 percent decline to a 2.5 percent increase.

The increase in payroll numbers is the greatest since April of 2009 while unemployment fell to 8.3 percent, the lowest since February 2009. Shipment of capital goods, orders for hard goods and business investment are all up incrementally or expected to rebound early this year.

Auto sales in the U.S. during last month, projected across the year, would come to total 14.1 million sales in 2012, an increase of slightly over 10 percent from last year.

Meanwhile Fox Business News reports that J.D. Power and Associates has stated the auto industry is nearing full recovery at a roundtable event in Las Vegas. Notably the price of the average new car has gone up $2,836 since 2008, according to their figures. The increase can generally be attributed to safety and infotainment enhancements.

“While we are still early in the recovery we are somewhat optimistic about both the future rate of growth as well as the overall health of the industry,” stated John Humphrey, senior vice president and general manager for J.D. Power and Associates’ Global Automotive Division.

The analysis of the automotive authority indicates what would seem apparent to even the casual observer – that the industry’s overwhelming need to reinvent itself has become a major benefit in the long run. The reality check of filing bankruptcy, despite massive government loans, shook GM and Chrysler out of their myopic complacency so now GM has returned to world leadership while Chrysler is back in the black. After juggling massive debt, surveying the global market and streamlining their operations, the Big Three are finally building cars people want to buy in significant numbers again.
Which is one of the points J.D. Power made – building vehicles based on demand rather than on the blind faith what was popular five years ago still is, ignoring sagging sales or obvious trends. Still, as the average age of cars on the road pushes past 10 years, the time for their replacement is nearing, while the availability of credit is improving as well.

To a great extent, the Lehman Shock to the U.S. economy resulted from the rampant promotion of sub-prime lending, in both the mortgage and automotive credit industries, to people who really couldn’t afford either, but were made to think they could.

Auto manufacturers have to avoid “getting happy,” forgetting to pay attention to what they’re doing and what’s going on around them. We should all, individually and within our various businesses, associations or groups, get better at learning from our mistakes.

History shows, however, all the aforementioned individuals and groups seem to have extremely short memories. Still life is change – that’s how it differs from the rocks. (Technically rocks change too, just very, very slowly.) The auto industry needs to remain lively and not become cemented in stone again.