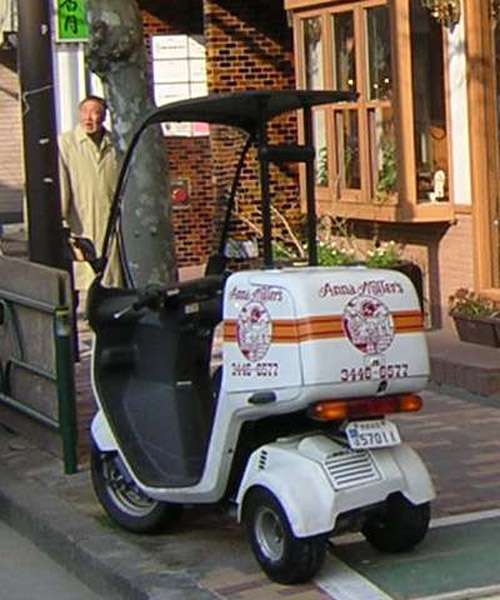 Domino’s Pizza has been working hard to win back market share with catchy advertising and remarkable deals on their Za. Today they are launching a contest open to any and everyone to create the ultimate delivery vehicle for the firm with $50,000 in prize money up for grabs.
Advertisement

Immediately, the potential possibilities for innovation and the radical reconfiguration of the hot food delivery system are myriad.

As this is essentially a fleet vehicle, the application of alternative fuel is bound to be advantageous. However since pizza delivery can rack up a good many miles in a day, the chances an electric design could win out are not good. On the other hand, if the ride is more the size of the Honda Canopy (pictured at right) in Anna Miller's livery taken by Larry Pieniazek during February of 2004 in Tokyo's Hiro-o district, it might work. Indeed it could possibly be made at a price point allowing a Domino’s outlet to have more than one, allowing one or two to recharge while the others are in use.

How about one that uses waste heat from the vehicle to either warm the pizza en route or actually cook it along the way (with a nod to the automotive cookbook Manifold Destiny), cutting delivery time to well under 30 minutes.

Is there a value to a solar roof? Wind turbines generating power to warm the pie.

Does it have to be a truck? How about using those motorcycles with three wheels and a large storage compartment behind the driver like meter maids used to use? It would use less fuel and be easier to park! Young drivers would probably love something like that.

Whatever you’re thinking (besides how good a slice would taste right now) all you have to do is work up your concept and submit it to ultimatedeliveryvehicle.com.

You don’t have to design the whole vehicle – you can suggest ideas for exterior wraps, packaging, interior and other aspects of the vehicle including signage.

The pizza purveyor has partnered with an outfit by the name of Local Motors, a community-focused auto design and fabrication group based in Phoenix. Those whose ideas are incorporated or help to inform the final design will share in over $50,000 in prizes to be awarded during the competition.

To submit your ideas and get additional information on the contest, visit the Local Motors site. You have to admit it would pretty cool to order a pizza and when the delivery person shows up, brag to your friends how this or that aspect of the vehicle was your personal doing.

So get started on whatever method you use to get the right brain lobe up and running and maybe you can help design the definitive pizza delivery vehicle for the 21st Century.