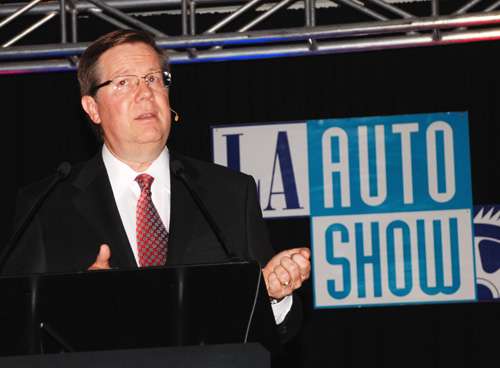 In his speeches at the J.D. Power NADA Western Automotive Conference yesterday, as well as before the Motor Press Guild today, Jim Lentz, Toyota Motor Sales President and CEO, highlighted the progress the industry has made and portrayed a future wherein auto manufacturers will continue to create a better tomorrow for us all.
Advertisement

At the NADA address, Lentz pointed out how it has only been three years since the Federal government bailed out GM and Chrysler, at a time when public opinion of automakers was at an all-time low. In a single year after the bailouts, the public’s view of automotive manufacturers improved markedly.

“Opinions of our industry increased by 15-percentage points,” Lentz said. “Gallup said it was the largest one-year improvement in the history of measuring public opinion about major U.S. industries.”

Then today, speaking to the collection of automotive writers at the MPG gathering during the Los Angeles Auto Show, Lentz pointed back in time to the contributions the industry has made to progress in the past.

Cayley was the father of seatbelts, Hetrick invented the airbag and Anderson came up with the revolutionary idea of windshield wipers in 1903.

Such have been the contributions of the automotive and related industries to the safety of drivers and passengers – a progression that continues unabated today.

So how did such a hallowed industry with a time-honored legacy turn back from the brink of disaster?

According to Lentz, they stepped up their game.

“We paid closer attention to our customers,” he said. “We worked through issues with regulators. We formed alliances and partnerships to meet future needs and we flat out made the best cars we’ve ever produced.”

In the meantime the economy has been slowly responding. Today many consumers are feeling better about their finances and prospects in general, while unemployment is at a three-and-a-half year low.

“Consumer Confidence jumped to a 5-year high,” Lentz added, “and the housing market seems to be turning the corner.”

The trends should continue as 2012’s auto sales will hit close to 1.5 million more units than 2011 and the industry should return to its peak sales of 16 million vehicles within a few years.

Increased sales this year notwithstanding, 20 percent of the cars on the road are over 16 years old, with the average holding at 11 years. This is good indication sales will continue to increase as consumers move up to safer, more economical and tech savvy vehicles.

Furthermore, auto credit rates have never be lower in recorded credit history and younger buyers are returning to the market in droves.

“The J.D. Power Information Network says younger buyers are returning to the market at a higher rate than any other age category,” he continued, “which bodes well for market longevity.

“Now, a large portion of these returning buyers will be comprised of Hispanic consumers. They’re the fastest growing ethnic segment of the US population… and will have a projected buying power of 1.5 trillion dollars by 2015.”

There are many bright signs in the automotive world, and it may well be California leading the way in the adoption of alternative fuels, with plans to build 37 hydrogen fuel cell stations across the state by 2015, according to the California Fuel Cell Partnership. The projections jump to over 100 stations by 2018.

Toyota is planning to introduce a hydrogen fuel cell sedan in 2015.

Nevertheless, Toyota’s sales are up 13 percent this year in the burgeoning West Coast market, thanks to the brand’s approach of offering a wide portfolio of advanced vehicles, including electric and plug-in variants.

“We plan on launching 21 new or redesigned hybrids globally between now and the end of 2015, starting with the all-new Avalon hybrid which will arrive at dealerships next month,” he said. “Hybrid technology continues to be key for us.”

However the company is not myopic on the subject of alternative fuels. The brand collaborated with Shell to establish a hydrogen filling station next to the headquarters in Torrance, which is used to fuel Toyota’s fuel cell vehicles as well as those of other manufacturers.

Just last month, Toyota activated a new hydrogen fuel cell generator to supply close to half of the electricity to six buildings at their corporate campus during peak demand, with zero emissions. This is enough to power about 765 homes or roughly twice the energy produced by the existing solar panel system.

“The goal of our alternative fuel product portfolio is to create a variety of vehicles for the future that can run on gas or other fuels and then let consumers decide what works best for them.”

That should be a plan we can all appreciate.

Next: Lentz discusses INSECT, a new hyper-connected, youth oriented commuter that seeks to use hand gestures to control features.