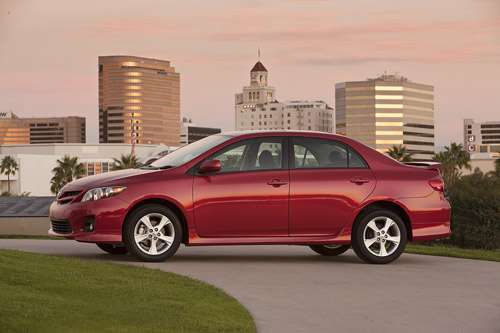 Due to the rising value of the yen compared to the American dollar, Toyota, Honda and Nissan have indicated more of their production for global markets is moving to North America. Doubtless, escaping the earthquake prone Pacific Rim provides even further incentive after the supply and production problems caused by last years natural disaster.
Advertisement

Yoshimi Inaba, Toyota Motor Corp.’s chief operating officer in Asia. told Alan Ohnsman of Bloomberg that Japan’s biggest automaker, will move more of its production to North American plants because of the impact of the rising value of yen to dollars
Toyota is already shipping cars and trucks built in North American plants to 19 countries, remarkably including South Korea and Saudi Arabia, with plans to considerably increase volume from 16,700 units a year, Inaba stated at the North American International Auto Show in Detroit yesterday.
“This is only a beginning,” Inaba said. “The only way to take advantage of this extremely high yen is to export from this dollar basis.”
Toyota, along with Honda and Nissan, have significantly restructured more of their vehicle production to sites beyond Japan simply because costs of producing cars in Japan are up. Thanks to the yen’s 8.3 percent uptick to the dollar over the last year.

Toyota opened a small car fabrication facility in Mississippi to build Corollas late last year. Exports from the company’s plants in the U.S., Canada and Mexico are primarily models that aren’t built in Japan anyway.

It is an interesting statement on the world we live in that the country in which the fastest growing sales brands in the U.S. – Hyundai and Kia – now is selling Toyotas built in the U.S. there in Korea.

Meanwhile Nissan is planning to build their third plant in Mexico to increase vehicle production in that country for export to both the U.S. and South America, according to Bill Krueger, vice chairman of Nissan’s operations in the Americas, during in an interview this week at the Detroit auto show.

The announcement of the new plant will be forthcoming in the next few weeks according to Carlos Ghosn, chief executive of both Nissan and alliance partner Renault SA..

Camrys, Avalons, Tundras Tacomas, Siennas and Sequoia SUVs are already built in North America for markets in Central and South America as well as the Middle East, Inaba said. Just last month The company initiated shipments of the Camry built in Kentucky to South Korea for the first time.

Toyota may eventually export more vehicles from North American than even U.S.-based automakers, thanks to Toyota’s global distribution network, according to Inaba. Toyota is also looking into the possibility of more facilities in Mexico as well.

“Using Mexico as an important base for either parts or production is no doubt,” Inaba said. “We are always looking at Mexico. We have a small experience in Baja, but that is not the end of the story.”

It is an interesting effect of the current global economy more cars are being built in the U.S. and her neighbors for export around the world. Who, if anyone, saw that coming?