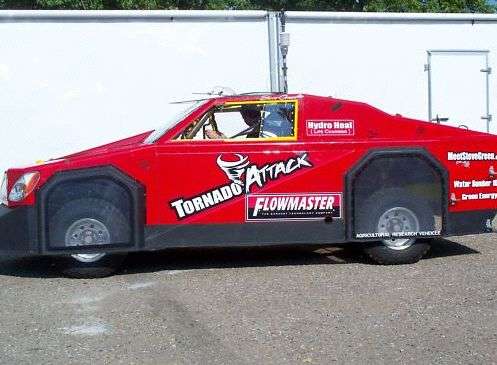 The first man who intentionally drove into a tornado, Steve Green, has announced his famed bright red Tornado Attack Vehicle is for sale. Green is selling the virtually bulletproof vehicle to fund his Walk into a Tornado Project. Green is seeking to promote his Yellowstone Energy plan, which would take advantage of the geothermal aspects of the national park to produce clean, unobtrusive power.
Advertisement

The top bidder will receive not only a verifiable piece of recent history, but also the opportunity to get up close and personal with some of the most horrific forces of nature – their own tornado adventure. Bidding starts at $75,000, Green and his crew will take the buyer on an outing during the height of the tornado season, May 15 through June 15. At the buyer's expense Green’s Team Tornado will take them to Tornado Alley – to drive into their own tornado. The new owner will also be privy to Green's walk into a tornado.

The vehicle was designed for the purpose of learning more about the rotational storms. The vehicle, Green, and the crew made history on June 12, 2004 when the famed tornado hunter drove into a twister and rode it out in the customized vehicle. The event was filmed by Discovery Channel's Storm Chaser, Reed Timmer. This vehicle, which came through the storm unharmed, has been seen not only on Discovery, but The Weather Channel and other programs.

Equipped with a 700-horsepower V-8 engine, it is made of 16-gauge steel coated with polyurethane impact-resistant material. The windows and wheels are covered with bulletproof M10 Lexan plastic. The windshield has three coats of DuPont Mylar film – a single sheet can stop a .38 caliber bullet.
Green stated the tornado vehicle could quickly drop its entire assembly down on its belly pan sucking the ground and holding the vehicle tight in the high winds with a system designed and built by Parker Hydraulics. The attack truck was designed and built over a five-year process by Green at a cost of more than a half million dollars.

Green's plans to use geothermal activity to creates a safer environment for citizens while providing a cleaner and healthier way to produce energy instead of the104 nuclear reactors located in the states.

"We have the most active region of geothermal activity on earth in Yellowstone National Park," he said. "By using Yellowstone's 10,000 geothermal pockets, we can reduce the carbon footprint by more than 85 percent."

The quiet, clean and efficient energy-producing plants would be in remote parts of the park where wildlife would not be disturbed and tourists would not see. The plan would put Americans to work building a safer environment.
The Tornado Attack vehicle is being sold on eBay 220777866130. You can also bid on a seat to ride along with Steve Green in a high-performance chase vehicle to witness his attempt to be the first man to intentionally walk into a tornado at eBay ID 220778143118.