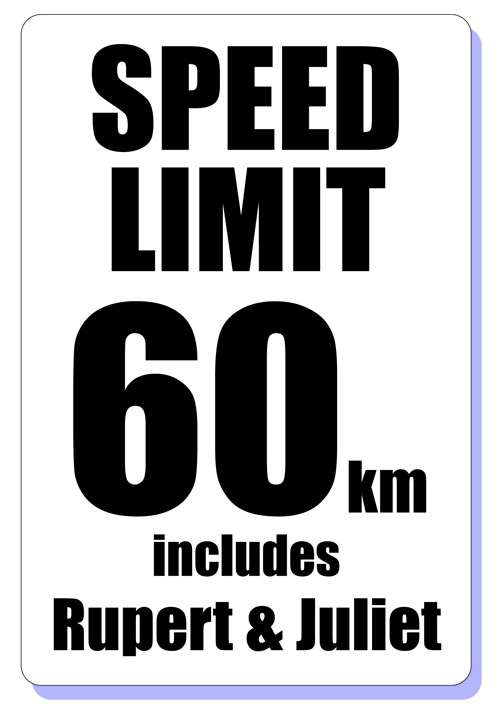 If you want safe driving kids, don't name them Rupert or Juliet

Drivers named Rupert or Juliet have been found the most likely to have multiple speeding tickets by the British insurance firm, Diamond, a female-focused coverage provider. Frankly, it cost less to insure female drivers.
Advertisement

The company examined over three million motorists to identify first names of drivers most likely to have points on their record for speeding. At least in England, the top five women's first names for speed queens are Juliet, Susannah, Justine, Deirdre and Alexis.

We’ve personally made the acquaintance of one woman named Alexis and she was an unmistakable wild one. In fact, she’s mentioned in a Tommy Bolin song from some years back. A friend and colleague confirmed this, by saying the only Alexis he ever knew fit the description to a T.

The men with the most cavalier disregard for speed limits are (again in the United Kingdom) Rupert, Julian, Piers, Giles and Justin. In this case, the only Justin we’ve personally known was fairly easy-going and presumably a relatively safe driver.

Some of the big surprises come from the occupations that get the most tickets for speeding. If you suspect off-duty ambulance drivers, you’re dead wrong.

Surgeons and chartered surveyors topped the list of job profiles most likely to have been cited for speeding, followed closely (and over the limit) by area sales managers, board chairmen and chiropractors.

On the flip side of the coin, the survey also identified the first names least likely to have been convicted of exceeding posted limits. These highly respectful of the law women are known by the monikers of Paige, Molly, Shannon, Bethany and Lily.

For men, those reflecting an uncharacteristic tendency to good citizenship tend to be named Connor, Terrence, Jake, Jordan and Joshua.

The best occupations with regard to observing speed limits are (surprise!) high school and college students, au pairs, typists and dinner ladies. We couldn’t find a good definition of “dinner ladies” but if you’ve seen the BBC comedy series by the same name starring Virginia Woods, that’s who they’re talking about.

For statistical purposes, the survey overlooked any name or occupation that did not appear over 500 times in the three million records examined.

Speeding is a contributing factor in many serious accidents, but is not always the cause of them. We witnessed a shocking collision last night in which a full size pick-up, traveling very fast on a residential through street, t-boned a classic mid-sixties convertible. The impact lifted the old convertible off the ground and across the intersection were it hit the traffic light, knocking it to the lawn, still blinking red, yellow and green.

It was not clear who ran the red light, but that was obviously the cause of he collision. It is clearly one of the most dangerous things anyone can do in a vehicle. If you blow through traffic signals in this manner, you are endangering both you and those around you.

Shakespeare correctly advised that a rose by any other name, would still smell as sweet. What's in question here is whether a driver named Rupert would still drive as fast if he had been named Connor?

According to Diamond, he might still smell as sweet or foul, but he wouldn't drive as fast.

Toyota's First EV Will Have a Name of BZ: Toyota BZ
First Videos From Inside The Boring Company's Las Vegas Loop
END_OF_DOCUMENT_TOKEN_TO_BE_REPLACED