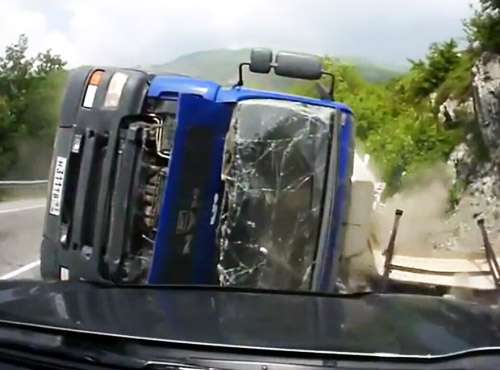 If you visit Russia, just stay in the hotel

A website called something like The Truth About Driving in Russia, if representative, will convince you there’s nothing like Driver’s Education in the former Soviet Union, not even for over the road haulers. It’s so convincing that even amidst the architectural wonders of St. Petersburg, you’ll want to take a walking tour with a watchful eye on any nearby roadways.
Advertisement

First we tip the Torque News fedora to Grayson Thagard of hIntv.com for tipping us to one of the freakiest auto vids ever, as a car mounted camera takes in a semi-truck trailer that topples over during a turn and slides right into the car with the mounted camera. It is labeled (in Russian) М4-ДОН Грузовик занесло на крутом повороте , which means M4-DON truck skidded on a sharp turn in English.

Driving a semi-trailer truck is a very complicated piece of work due the mind-bending level of natural forces such as mass, inertia, centripetal force and the tendency of some loads to shift when that pull to the side is applied to them. Then there are loads that can change their own mass, as in a truck full of live chickens that if spooked can all become airborne for a few amazing seconds – thereby greatly altering the weight of the load – if ever so briefly.

Then things like liquids can slosh around adding unusual vector forces to an 18-wheeler's intended trajectory. In addition, all those maximum speed signs on curving roads are really aimed at the lowest common denominator – high center-of-gravity, poor-cornering trucks and other large vehicles. Most modern cars and especially sports models can easily take these curves from 10 to 25-mph over those posted speeds safely – not to imply you won’t be ticketed for exceeding the posted speeds.

Though most of our laws are written to keep the worst offenders in line, the enforcement tends to extend to everyone. Nevertheless, if you’re driving a big vehicle, the curve speeds are very important to the safety of us all.

Now whether the long haul driver in the video, had his load shift, was caught off guard by a sudden wind burst or was simply taking the curve at an unsafe speed, his rig falls over on its side and slides into the recording car.

I have experienced something similar on a snowy highway in Denver, sliding around to face the wrong way in a lane with an oncoming Pepsi truck trying its best to stop on a slick surface – it makes one instantly aware of how small we really are.

In my case, the truck managed to stop a couple feet away, but in the video the truck hits the smaller vehicle and bumps it away like a croquet ball hit by a mallet. Fortunately, the truck had slowed enough after sliding at least an eighth of a mile, that neither the truck driver or the occupant of the camera-equipped car were injured.

One interesting facet comes when the driver of the passenger car gets out of his vehicle, completely focused on the condition of his own car – scarcely hurt in comparison to the truck.

The trucks engine cover is loose, the windshield is severely spider webbed, but the driver is uninjured, though he might have been in shock. He stands and seems to be examining himself for any bodily consequences of the accident. The other driver never seems to think of checking on the truck driver.

On the YouTube site, numerous other videos record additional mishaps on the website that just seems to be a catch-all for anyone who manages to get footage of an automotive mishap. They are all posted by different people.

Granted, Russia even after the breakup of the member states of the former USSR, is still a huge country. With miles and miles of highways and millions of vehicles on the road.

Another video shows the aftermath of a horrific collision involving two large commercial trucks and a full-size SUV. The trucks are savagely mangled, though the SUV probably ran into the completed impact between the two big vehicles after the fact, simply unable to stop in time as it is the least damaged.

The video shows a lengthy yard sale of glass shards and car parts stretching more than 50 feet. What appears to be a mile long backup of vehicles shows people stopped, outside their cars and could easily be taken for a group of Americans stopped at a construction delay – except no one seems upset or enraged.

Of course, the people still in their cars could have been leaning on their horns in a useless demonstration of their frustration, that only serves to further aggravate the people surrounding them. The audio track is a funky pop Russian song we wish we understood the words to – just to see if the Russians have the same caustic humor common to the U.S.

Once this gets around, there will probably be a site for such videos in America and it will prove once and for all, some of the worst drivers in the world are right here in the U.S. of A. Presumably in Russia, fewer people are joined at the jaw to their cellphones.

Have a happy, safe Memorial Holiday!

Aaron Turpen wrote on May 25, 2012 - 1:49am Permalink
It should be noted that big trucks, nearly the world over, including here in the U.S., have few (if any) safety requirements. Nearly every one they do have is to protect four wheelers (cars) who are involved in an accident involving the truck. The truck driver's only protection is the size of the rig being driven.
Don Bain wrote on May 25, 2012 - 3:06pm Permalink
Well it worked for this guy! If I flopped a semi and slid an eighth of a mile, I'd be in shock whether I hit a car or not!