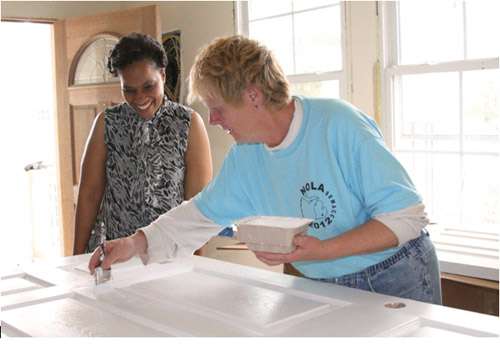 How the Toyota Production System is rebuilding lives in New Orleans

The Toyota Production System Support Center, a non-profit community support arm of the corporation, is using the same expertise in efficiency developed in their factories to aid in the reconstruction of homes savaged by Hurricane Katrina.
Advertisement

In a press conference held today, Courtenay LaRoche confessed to having packed just two changes of clothes for each member of her family when she fled her inner city New Orleans home two days before Hurricane Katrina would ravage the sprawling Southern metropolis.

Thinking it was “just another storm,” she had no idea her home would be destroyed, leaving her family with nothing but the clothes on their back, six and a half years ago last week.

By sharing the secrets of their production systems with the St. Bernard Center, Toyota has greatly reduced the amount of time required to rebuild a home. Thanks to the company’s efforts the St. Bernard Center can construct a housing replacement in half the time took them before the automaker came on board. In addition, Toyota Motor Engineering & Manufacturing North America oresident and Chief Operating Officer Shigeki Terashi presented $100,000 to aid the work of the New Orleans charity.

“This is a dream come true for me and my family. It has been six long years, but, now, we are finally home,” LaRoche said, speaking from her nearly completed new home. “I really appreciate how St. Bernard Project has treated my home, making sure everything is done perfectly. They are thorough with the work they are doing here. The volunteers, the workers, they treat my home like it's their own. They have such pride in the project; it's really special.”

The LaRoche family is just one of hundreds helped by the St. Bernard Center. Since the Toyota Production System Support Center partnered with the charity last June. The automakers assistance implemented significant enhancements in productivity, quality, safety and the time it takes to rebuild each house.

“Our construction process simply wasn't as effective as it could have been, and, as a result, we weren't bringing as many families home,” said Liz McCartney, co-founder and director of construction for St. Bernard Project. “Using lessons from the Toyota Production System, we have implemented efficiencies that have significantly reduced construction (lead) time to as little as six weeks. That's half the time it took us to build some houses prior to our partnership with Toyota. These improvements are making an incredible difference in our ability to rebuild homes for families in the New Orleans area quickly and affordably.”

Founded by Zack Rosenburg and McCartney, an attorney and teacher from Washington D.C., The St. Bernard Project was created in 2006 to address the tremendous needs of the community. Following a month of volunteerism there, the pair started the nonprofit to find a solution to the needs expressed by the residents whose homes were destroyed by the storm.

Many of the people the St. Bernard Center helps simply lack the ways and means to reconstruct their former homes, seeing the organization as their last chance at a return to normalcy. The project employs volunteers from AmeriCorps and other support groups, as well as returning war veterans in their projects.

It is but one of over 170 companies or not-for profits Toyota has decided to aid.

“At Toyota, we judge our success not just on the vehicles we make, but, also, on the positive impact we are able to have in local communities across North America,” Terashi said. “With so many nonprofits being asked to do more with less, the need to operate with greater efficiency has become even more vital.”

Toyota’s efforts have resulted in the following improvements at the St. Bernard Center:
The time required to rebuild a home has been reduced from 116 days to 60 days – a 48 percent improvement;
The number of houses rebuilt each month has increased similaryly, from 8.6 to 12.8.
Toyota Production Systems have improved homebuilding efficiency by sharing know-how and collaborating closely with St. Bernard Project’s professional staff, skilled construction supervisors and AmeriCorps members.

“Before the Toyota Production System, it was difficult to see problems -- which caused wasted time and duplication of work,” said Toyota General Manager Jamie Bonini. “We want to instill a disciplined, but flexible construction model.”

One major challenge was just to simplify scheduling hundreds of volunteers and construction contractors to work on the houses. Where there was once no organization to this, today, in the project headquarters, management boards track each and every volunteer, worker, schedule, inventory and status reports for every home in the reconstruction process.

“This has been such a rewarding experience,” Bonini said. “St. Bernard Project’s mission is incredible – we are proud to be a part of it.”

If we all could take what we learn at work and find a way to improve our surrounding communties like the Toyota Production System has, together we would build a much better world.