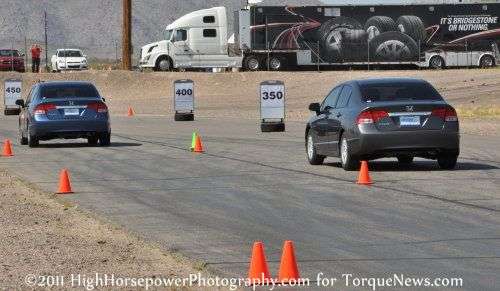 Go farther on the Fourth with “Green tires”

As everyone gets ready for their Fourth of July, everybody would like to get a little more out of their gas dollar despite the slight lull in gas prices. Though only a few will be replacing their tires over the next week, that decision does have an effect on the mileage you get. Everyone else can benefit from the following reminders on how to get the most out of your fuel dollar.
Advertisement

Most new cars sold today come with fuel-efficient, or "green," tires in order to help them meet national fuel-efficiency standards or Corporate Average Fuel Economy (CAFE) standards. Such tires have low rolling resistance as a result of a special combination of rubbers reducing the amount of friction between the tire and the road, directly related to improved economy. Reducing friction is an excellent method of saving gas without sacrificing safety. The image on the right shows two perfectly identical Honda Civic Sedans - one with the standard OEM tires and the other (on the left) using Bridgestone Ecopia tires. Both are rolling with the engines in neutral and as you can see, the Civic on the left rolled noticeably further.

However, when the original tires need replacing, the tendency is to replace fuel-efficient tires with lower-quality models, reducing the economy of the vehicle and consequently using more gas, at the expense of air quality and personal income.

"Buying green tires is an easy way to make sure that your car is as fuel efficient as possible," says Randy Dearth, CEO of LANXESS Corporation, which makes the advanced rubbers used in many green tires. "Green tires may cost a little more up front, but they'll quickly save you money at the pump."

The National Highway Traffic Safety Administration is developing a new standard label to help people quickly and easily compare the efficiency of tires from different manufacturers. Meanwhile, consumers should simply ask their local auto parts dealer about rolling resistance and fuel efficiency to make an informed choice, save money and help take care of the environment.

Other effective ways to boost fuel efficiency are:

• Keep tires properly inflated. Proper inflation is vital to getting the most miles per gallon out of your car. An under-inflated tire creates more friction with the road, forcing your car to use more gas to propel it forward.

• Lighten the load. Especially when traveling long distances, a vehicle's weight has a significant effect on fuel efficiency. Every additional 100 pounds in your car increases energy consumption by one or two percent.

• Align the wheels. Improper wheel alignment causes tires to wear out more quickly and makes the engine work harder, reducing gas mileage as much as 10 percent.