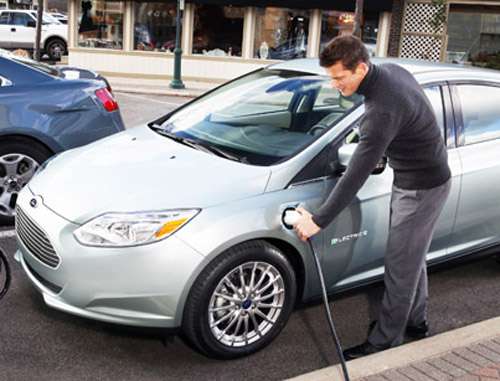 During opening statements for the conference titled Looking Ahead To 2013: What Next For High MPG Cars?, Baum pointed out how the consumer is benefitting from the plethora of improved combustions engines, diesels, more and more hybrid options and a growing cadre of plug-in vehicles that are improving fuel economy not just in commuters and small cars, but also in full size cars and crossovers.

After highlighting many of the coming offerings and commercial successes of numerous manufacturers with diesel and hybrid models, Baum focused on the progress Ford has made and how the model of their business approach benefits consumers not just in the US, but the world over.

“Taking Ford, for example,” he said, “is using their C1 platform on the Focus and the Transit Connect, both high mileage vehicles. The C-Max, on the same platform, in its first month, and available only as a hybrid is selling well beyond their expectations and a plug-in is coming next year.”

He continued to point out the success of the Fusion, with a plug-in version coming next year.

“Another thing Ford is doing on the Fusion is stop/start. It’s a little too early to see how that is going but it’s a $295 option that’s very easy for the consumer to understand the payback.”

Baum then pointed out the fact they are all built here in the same plants creates savings, and thus profits for the firm that result in saving for the consumer.

Passing the podium to Luke Tonachel of the NRDC, the discussion continued with his opening remarks.

“The future is often shaped by our recent history so it’s helpful to quickly take stock of our very recent history in relation to fuel economy,” Tonachel stated.

Pointing out the passage of the Energy Independence Act by Congress in 2007 with the consequent signature by then president George W. Bush, he noted the CAFE requirements goals for 2016 and 2025.

“If we had stayed at the 2007 efficiency levels instead of having the fuel economy improvements that we’ve recently had, Americans would have spent another $8 billion dollars at the pump annually.”

He continued to say they had called 2012 the Year of the Green Car and in fact that year was blending into 2013 as the outlook for increased fuel economy simply continues to improve on schedule to meet the CAFE requirements.

He highlighted how in 2009, there were only 28 high mileage cars that were in full compliance with Federal mileage goals and today there are over 61. In 2013, another 6 hybrid models and 8 more plug-in vehicles will be added to those totals.

He went on to point out how the move to higher mileage vehicles is creating jobs as the production of batteries that enable start/stop technology and other new technologies are being produced here.

One participant in the Q&A portion of the conference questioned the accuracy of the EPA mileage estimates and who should be in charge of verification of manufacturer claims?

Tonachel replied that trust was an iconic word in that equation and it was in the brand’s interest to establish that rapport with the consumer. He continued that the means to verify both the claims of government agencies and manufacturers exists in the news media itself.

Another print journalist wondered how the costs of these new technologies were going to fly with economically strapped buyers.

Baum replied that the current level of CAFE requirement does not necessitate the plug-in and full electric cars, but that they will become more cost effective over the long term as they become more essential to the overall mix of vehicles.

Nevertheless, the alternatives of diesel and hybrid cars are doing very well with the C-Max as an excellent indicator. The price premium on plug-ins and BEVs will remain for the next three or four years when the volume should begin to make them more competitive with conventional combustion and hybrid vehicles.

He admits that consumers have widely varying needs and perceptions, so that for many, the ICE will continue to be their choice, but the market has shown a vehicle doesn’t have to sell in the millions to be a viable choice for many consumers.

Baum pointed out how Toyota has taken the technology in the Prius that it marketed globally, and then spread it across their line, learning which vehicles will sell best in which markets, thereby cutting the cost of hybrid technology per unit and greatly increasing their profits in the process.

He quoted the NHTSA as saying they expect by 2025, 90 percent of all vehicles will feature advance high mileage ICE power plants, while still achieving CAFE goals. Consequently the need for hybrid and plug-in electric vehicles to comprise even a large minority of the vehicles on the road remains a few years off.

That doesn’t mean the hybrid equation doesn’t work for some folks.

“To illustrate why we think both the IC engine and hybrid will do very well, the Fusion is a perfect example,” Baum said. “The Fusion is offered with three variants – an internal combustion version, a hybrid and next year a plug-in hybrid. Even though it has only been out a few months, if you look at the hybrid volume for the Fusion, relative to the previous version, the increase is dramatic. It’s because the economy and price comparison is much better. You can do very well with the internal combustion engine because of the EcoBoost, but people are finding for not a lot of money, they can go to the hybrid model and realize a payback.”

He continued to point out how the Toyota Camry is now selling up to 40 percent hybrid models, due to this narrowing of the price gap and the higher fuel economy.

When Torque News inquired if the current lull in gas prices would affect the curve of improvement, Baum said if the current dip in prices continued on into summer it could indeed have an effect, however given the world peak sales in automobiles this year and the global competition for oil, that simply is not likely to occur.

Though we are unlikely to ever see the $7.50 to $8 gas some fear-mongers predicted, realistically, most parts of the nation will see gas continue to waver within the $3,50 to $4.50 range for the next year or so.

Better fuel economy, more diesels, hybrids and plug-ins on the road and an improving economy are the best Christmas presents for which America could wish. Let's hope these two pundits indeed have their fingers on the pulse.

If they don’t, who does?