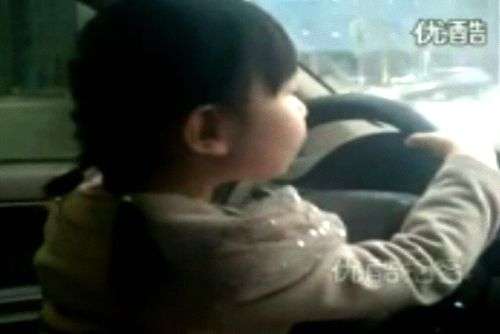 A video posted recently online shows a four-year-old Chinese girl driving a car on the busy streets of Jinan, China while her father provides advice and guidance from the back seat – remarkably police cannot really interfere as the video itself violates no local statutes.
Advertisement

The lovely and attentive little girl is sitting with her face no more than eight inches from the steering wheel, thanks to the highly adjustable moderns seats, which rise in height as well as forward and back. Too, a tilting, telescoping steering wheel may have been also helped to make it physically possible for the average height for her age girl.

The article and video appear on the ShortList.com and show the girl maneuvering through traffic, steering around an SUV stopped in the road with flashers on, her small arms crossing as she performs the relatively complex maneuver.

"Concentrate! Be careful when passing other vehicles," her father is quoted as telling her.

At one point she mistakenly enters a left turn lane but deftly steers back into the forward lane to continue on her way. After roughly two minutes of the video her father said, "Jia Zheng, stop the car. Let daddy drive." She carefully crosses to the right side of the road and parks the car, putting the shifter into park with some difficulty.

She then crawls into the passenger seat and waits as dad gets out of the back seat, moves the front seat back and down, then removes blocks attached to the pedals with elastic straps.

It seems that even though children under 14 are forbidden to drive, there are no teeth to the law. Even if the police stopped her, children can’t be cited for traffic violations. They could only give the parents a dressing down.

“In the worst scenario, if an accident happened,” said Li Xiaobin, a spokesman for the local constabulary. “We could only ask the parents as guardians to compensate the other parties."

In 25 years, Jia Zheng may be piloting starships – at least she’s getting a head start at controlling the vehicles of today.

As far as her dad is concerned, is he fulfilling his daughter’s interests or pushing her to achieve? We don’t have enough information to know, but we hope he is as responsible as his young daughter is, by all appearances, a conscientious driver.