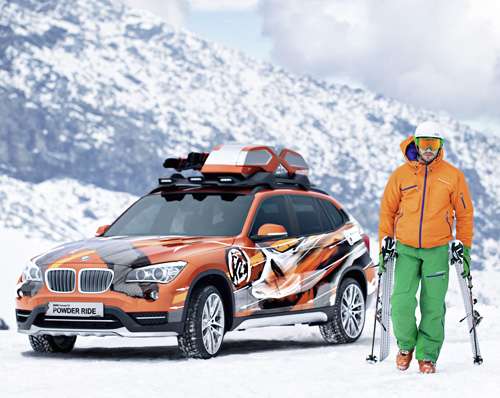 The model likely to garner the most attention at the 2012 Los Angeles Auto Show may well be the BMW K2 Powder Ride Concept, based on a special edition of the X1 wrapped tight in an infectious graphic style and sure to be the toast of resorts from Blackcomb and Squaw Valley to Vail and Steamboat Springs.
Advertisement

A creative symbiosis between BMW and K2 has inspired this stunning concept to debut in Los Angeles, as the ski season that inspires it commences. The BMW Concept K2 Powder Ride seeks to embody the adrenaline rush of schussing down an Alpine run of thigh-deep powder.

The concept heralds the arrival of the BMW X1 Powder Ride Edition, which arrives in BMW showrooms this month. What may be one of the most stylish ways to get to the slopes for years to come, the special edition will be available this winter only, for only $44,390 including delivery and handling charges.

The BMW Concept K2 Powder Ride features an exclusive aerodynamic roof storage and rack along with refined interior details. Valencia Orange metallic paintwork blends with the aforementioned graphic based on a limited-edition K2 ski design. In the wrap, the image of a fox springs forward from radically rendered X from the rear quarters to the front doors.

This sporty denizen of the winter wonderland has eight extra millimeters of suspension travel plus 19-inch light-alloy wheels in Ferric Grey with polished spokes. Front and rear sills plus side skirts are Ferric Gray as well, suggesting forward motion through the crossover’s snow and loose terrain habitat.

Boarders will revel in the 320-watt Harman Kardon sound system, installed in luggage boxes on the driver’s side. The speakers are two-way turns the X1 into a powerful sound stage for après ski fun with a Class D amplifier sporting 2 x 550-watt output, a 500-watt subwoofer plus a rocking microphone from AKG are everything needed for spontaneous parties except hot bodies and cold drinks. For the appropriate ambiance the car even provides lighting with luggage boxes illuminated in Blue and/or Orange and three LED spotlights on the front edge of the vehicle top.

BMW i8 Concept Roadster
Of course, the K2 Powder Edition may have to share the stage with the i8 Concept Roadster, a star with its own attractive charms. Like a powertrain developing 354 horsepower and performing zero-to-60-mph sprints in a quick 4.6 seconds, all while doing it in true Hollywood style. The BMW i8 Concept Roadster could easily turn a lot of heads, even in Los Angeles. As BMW’s third i-concept, the i8 combines lightweight design with hybrid technology to engender a true sports car experience, while getting a phenomenal 78 miles out of a gallon of gasoline.

Attendees will do double takes when they see the upward-swiveling, windowless doors and a range of on-board equipment, including electric kickboards stowed under a transparent tailgate. Based on BMW’s innovative LifeDrive architecture, the concept utilizes a lightweight underpinning, modular construction and exotic materials. The i8 Concept Roadster is a plug-in hybrid vehicle powered with a quick charging lithium-ion battery.

Both employ the same 300 hp inline-6 engine, enhanced by BMW TwinPower Turbo technology, the same powerplant known for its pulling power and efficiency in the BMW 335i and 535i.

The electric motor adds another 55 hp from power stored in a high-voltage lithium-ion battery beneath the cargo area. Power is sent to the rear wheels by BMW’s eight-speed automatic transmission by both drives.

A wide range of driver assistance systems and BMW ConnectedDrive telematics, and most of the options available for the variant BMW 3 Series and 5 Series, can also be ordered. The BMW ActiveHybrid 3 is base priced at $50,195 including delivery charges and the ActiveHybrid 5 starts at $61,995, respectively.

BMW X5 xDrive35d.
As America slowly awakens to the efficiency and low-end torque of diesel engines, BMW has been designing diesel engines since 1983, when the fastest diesel in the world, the BMW 524td was introduced. The new X5 xDrive35d benefits from all that learning and is only one of four BMW X5 models sold in the United States.

BMW’s mastery of engineering diesel engines has eliminated all reservations about the sound of a diesel engine, helping the brand achieve a bigger market share, not just in Europe, but across the world.

Half of all BMW's European sales are diesel powered vehicles. BMW Advanced Diesel engines set the standard for torque and pulling power unattainable by a gasoline engine the same size while consuming 25 percent less fuel.

BMW’s 3.0-liter diesel with Variable Twin Turbo has repeatedly won the prestigious International Engine of the Year Award and is expanding its global success as the BMW Advanced Diesel in the popular X5 Sports Activity Vehicle.