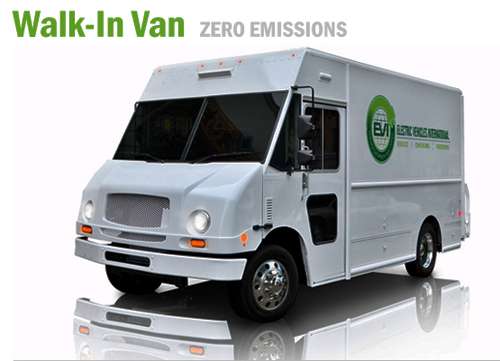 With strengthened incentives for fleet electrification in New York and Chicago added to the demand in California, EVI is ramping up production of medium and heavy-duty electric trucks to meet the demand.
Advertisement

"This is an exciting time for EVI, and consumers worldwide," noted Ricky Hanna, President and CEO of the firm. "We're proud to provide a commercial zero emission solution for today's goods movement industry that sets the stage for stable and sustainable fleet management for decades to come."

California Governor Jerry Brown has praised the company for fabricating 15 trucks a month with a staff of 60 workers. EVI now has over 50 trucks fulfilling UPS routes in California, produced in the Stockton plant.

Meanwhile, other states including New York and recently the City of Chicago have begun offering deployment incentives to companies willing to field electric medium duty trucks.

EVI sees a rich market opportunity and is considering adding to its production capacity with a plant in to the Midwest. The company is already working with several leading companies actively expanding their electric vehicle fleets.

The van utilizes a Lithium Iron Magnesium Phosphate battery and the motor produce 120kW of continuous power with a maximum output of 200kW or 260 horsepower.

The electric van is built upon a chassis fabricated by Freightliner Custom Chassis Corporation. The two firms are collaborating to target fleet companies compatible with electric vehicles.

The EVI Walk-In Van will be displayed in the Freightliner booth at the Association for The Work Truck Industry (NTEA) trade show next month.
"FCCC has been a longtime leader in developing alternative-fuel propulsion chassis, and we see our work with EVI in the development of all-electric products as an important area of focus and opportunity," said Bob Harbin, President of FCCC. "As you can see, EVI has experienced strong interest in this product, and we are excited about what the future holds for the development and expansion of all-electric products in the light and medium-duty truck market."

The efforts of the two firms are in keep with CALSTART’s mission to clean the air, create jobs, cut imported oil and reduce global warming emissions.

"It's heartening to see companies like EVI which take full advantage of these financial incentives succeed on so many levels,” stated John Boesel, President and CEO of CALSTART. “Indeed, they are the ones setting the stage for a clean transportation future."

Though the onus is placed on passenger cars to achieve these goals, the emissions of fleet trucks far exceed those of passenger cars due to the mileage logged annually.

Kudos are due EVI and all the firms supporting this effort.

LG's New EV Battery Plant Is a Welcome News for Tesla
Tesla Giga Berlin's New Hurdle: It's Not Only the Gov't, but Now Tesla Itself
END_OF_DOCUMENT_TOKEN_TO_BE_REPLACED