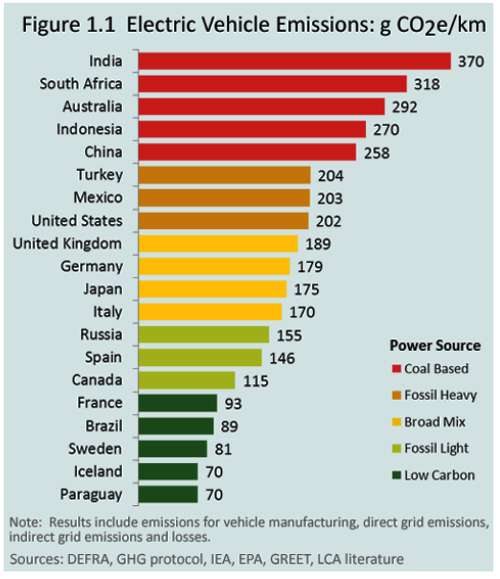 The degree an electric drive vehicle improves the level of greenhouse gas emissions is not evenly shared around the globe and depends largely on how much of a country’s energy is produced by coal-fired generators.
Advertisement

An analysis by Shrink That Footprint states the carbon emissions of grid-powered electric cars, where coal based generation is used, show little difference than the average petrol vehicles, but in countries with low carbon electricity they are far cleaner than even modern hybrids.

The report titled, Shades of Green: Electric Cars’ Carbon Emissions Around the Globe compares the climatic impact of grid powered electric vehicles in twenty of the world’s major countries in grams of CO2 emitted per kilometer driven. The analysis incorporates the entire range of electrical generation, as well as fuel and vehicle manufacturing emissions.

“This work highlights just how much the climate benefit of going electric varies around the world,” stated Lindsay Wilson, lead author of the analysis. ”For electric cars to achieve their carbon reduction potential they need to be charged with low carbon electricity.”

Startlingly, the best and greenest place to drive an electric car is probably where the fewest exist – in the mountainous country of Paraguay where hydroelectric generators produce five times the power the nation needs. As one of the few exporters of electrical power in the world, an electric car’s gas-burning equivalent in Paraguay would have to go 220 miles on a single gallon of gas to be as green.

A very close second is Iceland, another country where the production of electric power makes an electric car far more environmentally friendly than even the highest mileage hybrid.

In India and China, where almost all power is generated with the hard black fossil fuel, where Torque News reported the widespread incidence of health threatening smog last week, an electric car doesn’t change the mix. In these places, equal parts of the lung choking emissions come from cars and coal-powered energy plants.

In Asia, choosing an electric car simply means you’d rather be poisoned by the power plant than the cars of your neighbors, without significantly altering the atmospheric conditions.

In the US the shale gas production of electrical power is rapidly displacing coal generation, lowering the emissions of electric driving. Though it varies from state to state, 2009 data reveals EV associated emissions would require a fuel economy of 40-mpg in a petrol car to be equivalent, like some hybrids.

However as the carbon intensity of electricity has fallen 15 percent in the US during the last decade, electric vehicle emissions will probably fall below gasoline hybrids nationally soon, as they already have in many states.

In the United Kingdom, Germany, Japan and Italy, power is produced with the whole range of natural gas, coal, nuclear and hydroelectric generation, placing an EV’s carbon footprint comparable to the very best petrol hybrids or most efficient diesels. In England the levels equal a gas-based fuel economy of 44-mpg, while in Germany it’s up to 47-mpg.

Up north in Canada and across the pond in France, where electricity is primarily produced by hydro-turbines or nuclear generators, the gasoline emission equivalencies are 87-mpg and 123-mpg respectively.

In these two countries, along with Iceland and Paraguay, electric cars have the potential to remove over half the vehicular emissions being put into the air. In each case manufacturing accounts for nearly two thirds of EV emissions, highlighting the efforts of some manufacturers to lower the carbon footprint of building the vehicles themselves.

LG's New EV Battery Plant Is a Welcome News for Tesla
Tesla Giga Berlin's New Hurdle: It's Not Only the Gov't, but Now Tesla Itself
END_OF_DOCUMENT_TOKEN_TO_BE_REPLACED