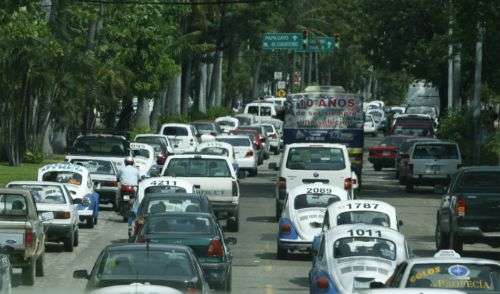 It’s known that the air near major intersections where traffic stagnates is highly polluted with particulate matter. Now a study by the Harvard Center for Risk Analysis (HCRA) at the School of Public Health projects the additional emissions from traffic congestion in the nation's 83 largest urban areas lead to more than 2,200 premature deaths in the U.S. last year.
Advertisement

The study, The Public Health Costs of Traffic Congestion: A Health Risk Assessment, was published in the scientific journal Environmental Health. It is the initial attempt to quantify the public health implications of growing traffic congestion in America.

"Our estimates of the total public health costs of traffic congestion in the U.S. are likely conservative," the study authors write. They point out their research considers "only the impacts in 83 urban areas and only the cost of related mortality and not the costs that could be associated with related morbidity, health care, insurance, accidents and other factors."

The study projected the growth of traffic congestion and resulting emissions from a baseline in 2000 until 2030. The report assumed no alleviation of the conditions causing the congestion during the next 19 years.

While the study was not intended to research solutions to congestion it did suggest solutions would likely vary from community to community. Possible strategies include better traffic management through congestion pricing, traffic light synchronization, efficient response to traffic incidents and adding new capacity. More refined models of traffic dynamics specific to each urban area and considering public health study models could be used to explore the impacts of proposed strategies.

There was a little good news to report: The number of premature deaths and public health costs directly due to traffic congestion has been declining over the past 10 years and will continue to do so until 2030 when it will again begin to rise.

The reason is the average 20-year-old combustion engine produces 100 times more fine particulate matter than the average new car – not including hybrids and electric vehicles that are even less polluting, according to Tim Jackson of CADA, in reference to research performed in Boulder, Colo. last year.

The report was financed by a grant underwritten by the Transportation Construction Coalition (TCC), which includes 29 national associations and labor unions with an interest in federal transportation policy. The TCC is co-chaired by the American Road & Transportation Builders Association and the Associated General Contractors of America.

The Harvard Center for Risk Analysis was founded in 1989 and is recognized as a world leader in applying decision theory, environmental health science and economics to a broad range of environmental health issues. HCRA is a research institute within the Harvard School of Public Health, with the objective of using a variety of analytic methods to inform public policy decisions relevant to public health.