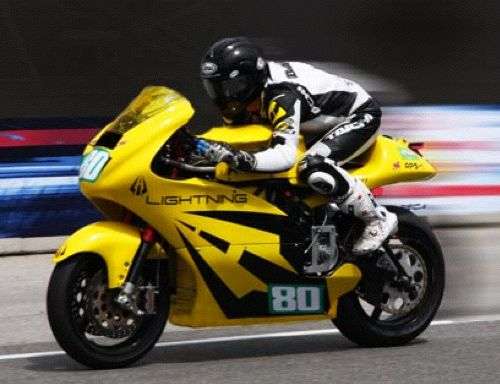 We’ve been trying to convince people for years electric vehicles will be more powerful and even faster than combustion engines, but they simply don’t believe it. They say things like, “Electric motors will never work for racing because they would need too many batteries for preliminary trials and everything else.” Of course they’ve failed to consider inductive power transmission, which has absolutely nothing to do with this story.

Lightning Motorcycle’s electric motorbike is powered by an ENER1 lithium ion battery pack, as are most hybrids and EVs. The company is a leading provider of batteries to automobile and motorcycle manufacturers, among others

"It's extremely rewarding to be working with such an innovative customer like Lightning Motorcycles, which has set multiple land-speed records over the last year," stated Chris Cowger, president of Ener1. "Lightning recently switched to using Ener1's automotive-grade, lithium-ion PHEV cells in their motorcycles, and we're glad to be part of the team that helped them achieve the world land-speed record. We're also excited that the technology and innovation Lightning uses for its record-holding SuperBike will also be available when the company's electric commuter motorcycle and scooter hit the market next year."

Lightning Motorcycles is also working on prototypes of electric bicycles, scooters and ATVs. They recently signed a supply and distribution agreement with Ener1to use their expertise in design and engineering electric motorcycles to sell more PHEV and EV cells and energy storage solutions into the growing e-bike market.

"Ener1's PHEV cells performed flawlessly at Bonneville, and we're extremely pleased with our decision to switch to their energy storage solutions," stated Lightning Motorcycles Founder and CEO Richard Hatfield. "Our goal is to push electric-motorcycle technology to parity with gas-powered motorcycles, and we believe Ener1 will be a terrific partner in helping us realize that goal for both our racing and commercial bikes."

Before very long we mayall be moving at the speed of electricity.