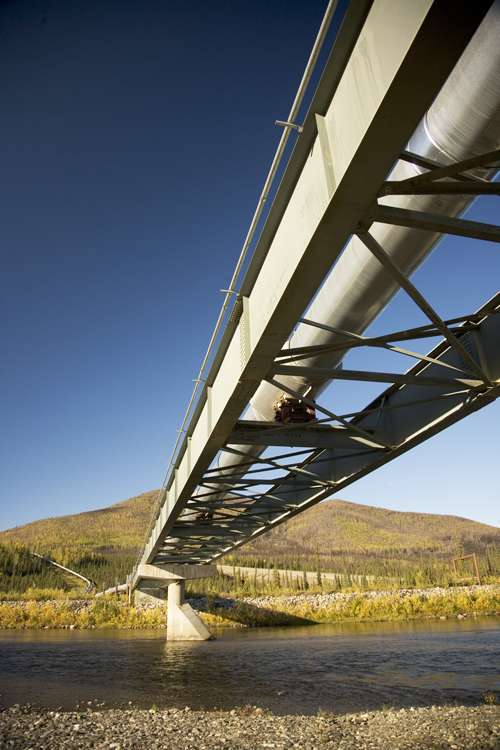 As the State Department considers whether to approve or disallow the construction of the Keystone XL pipeline to move oil tar sands from Canada to ports in the Gulf, corporate media are exaggerating the dubious benefits and belittling the considerable risks the pipeline poses to aquifers and the environment in general.
Advertisement

• The Keystone XL pipeline will not increase output of CO2

• The pipeline will contribute to US energy security

• The pipeline will create many US jobs

• The pipeline will maintain downward pressure on gas prices

The CRS findings included the following highlights:
• The tar sands oil in Canada average contain more greenhouse gasses (GHG) than the crudes they would displace in U.S. refineries. From Well-to-Wheel (WtW) the combustion emissions average, 14 to20 percent higher in Canadian oil sands crude compared to the weighted average of petrol sold or distributed in the US.

• During the refining process or Well-to-Tank (WtT) production, the GHG emissions are from 72 to 111 percent higher for the crude the XL pipeline would carry compared to fuels sold or distributed here.

• Reliable estimates of the effect the proposed Keystone XL pipeline would have on the U.S. GHG footprint put it between 3 million to 21 million metric tons of GHG emissions annually.

Some portion of these emissions will occur anyway if the Canadian oil tar sand fields are extracted, but without the Keystone XL that becomes increasingly unlikely. Not surprisingly, several competing pipeline proposals are meeting with stiff opposition from environmental and indigenous ethnic organizations. The pipelines which would enable extraction these CO2 rich sands are all under attack, and are unlikely to happen within the next decade, if ever, unless the XL is approved.

Construction of the XL endangers aquifers and the environment
The original XL pipeline route engendered fierce opposition in Nebraska by crossing the sensitive environs of the Sandhills and the Ogallala Aquifer. Though the route has been changed to skirt the Sandhills area, it still endangers the aquifer that two million people drink from and that nourishes the state farm production.

In a 2011 study, John Stansbury of the University of Nebraska-Lincoln reported a worst-case scenario pipeline spill in Nebraska "would pose serious health risks to people using that groundwater for drinking water and irrigation," according to the Lincoln Journal Star.

Though TransCanada, the company behind the proposed pipeline, has move the route to skirt the sensitive Sandhills, the problem remains. Much of northern Holt County crossed by the new route is sandy and permeable in an area where the water table is very high and close to the surface.

Torque News has previously reported on how little oil it takes to contaminate massive amounts of water, so in such an area even a small spill could have disastrous results.

The record of the oil industry is hardly perfect. The transport of oil by pipeline or tanker inevitably creates spills, making the XL pipeline doubly inadvisable. Oil companies make shiny promises of responsible stewardship, but then cut costs by slashing oversight.

The pipeline TransCanada currently has in operation had 12 spills during its first year of operation, including one that dumped 21,000 gallons of crude in North Dakota.

The pipeline cannot improve US energy security
In Ecuador, anti-government rebels have damaged pipelines to fight back against both the government and the oil companies. Putting the XL pipeline through the heart of America would simply create an easy target for our enemies. The subversive placement of a handful of IEDs could cripple our water, food production and perhaps our economy as well.

The only thing that can improve US energy security is reducing our consumption of oil – pure and simple – not by proceeding to dig up the worst quality crap we can find and then ship it cross continent in a vulnerable pipeline.

In simple fact, oil is now a global commodity – anything impacting the production, transport and refining of crude oil anywhere in the world affects the price we pay at the pump. This would still be true even if we only used what we could find in the US and Canada.

Limiting our use to what we produce would give us a certain independence, which is an admirable goal, but what happens in the Middle East would still be of concern to us.

"The extensive network of pipelines, shipping and other options for transporting oil around the world means that a single world oil price prevails," stated a Congressional Budget Office report last week. "Disruptions related to oil production that occur anywhere in the world raise the price of oil for every consumer of oil, regardless of the amount of oil imported or exported by that consumer's country."

Ultimately, using the least oil we possibly can won’t keep the price of oil from fluctuating – it would just make it much less a bother.

The pipeline would actually create few lasting jobs
Despite an initial study, commissioned by the corporation, tainted by flawed and groundless claims the project would create 100s of 1,000s of jobs, TransCanada now states the northern pipeline project would create 9,000 American jobs through early 2015, on top of the 4,000 workers constructing the southern portion.

Based on the firms projected funding for labor during pipeline construction, plus the number of construction crews needed, the final DOE Economic Impact Statement estimated there would be approximately 5,000 to 6,000 direct construction jobs in the United States lasting the two years needed to build the pipeline, according to the National Journal (linked to a pdf download.)

According to a study done at Cornell University, the pipeline could be like a new Wal-Mart store coming to town, displacing more jobs than it creates, with as few as 50 Americans gaining long-term employment.

No perceptible impact on gas prices
Even if approved, the project would not bring crude to the gulf until 2020, so it would have no effect whatsoever for years to come. TransCanada’s own analyst states any effect the pipeline would have on US gas prices would be modest.

Remarkably it could actually increase prices in the Midwest by relieving the current oil glut in those states. By shipping Midwest oil to export and higher profits via the pipeline, local supply and demand could boost the price in those states.

Finally, Valero, the company contracting to buy most of the tar sands crude if it can get it piped to the gulf, plans to refine it there into diesel and jet fuel for export. Then they import refined gasoline from their operations in the UK.

Simply not worth the risks
So for the Department of State to approve this project would be a very bad choice.
Why should we endanger our heartland and water supply, with no perceivable benefit to anyone other than TransCanada, so they can make a profit pouring millions of tons of CO2 into the air?

It just makes no sense at all. Of course, that’s no guarantee it won’t happen, is it?

Aaron Turpen wrote on February 17, 2013 - 10:31pm Permalink
So I guess endless wars in the Middle East are preferable then.
Tre Deuce wrote on February 18, 2013 - 1:52pm Permalink
Note: "The only thing that can improve US energy security is reducing our consumption of oil – pure and simple " Most of the Canadian oil transported by the pipeline is intended for export out of the US, so would have little impact on domestic fuel supplies.
Alderman wrote on February 18, 2013 - 10:11am Permalink
Do you think that a few thousand protesters are going to prevent the construction of this pipeline? Who do you think runs America and makes the decisions behind closed doors? The major oil companies, big business and foreign nations, thats who.... The big oil companies and foreign countries(China,etc) have invested multi-billions of dollars into developing the oil sands, and they apply too much pressure for any government in power to resist. They are not going to abandon this. The same applies to the 'Northern Gateway Pipeline' proposed to go through Northern British Columbia, to send oilsands crude to Westcoast ports for shipment to Asian markets. There is also to much at stake for the economies of the provinces/states involved. Everyone gets revenue/tariffs/taxes/tolls for the passage of oil over their territory. Local governments find it hard to resist the extra revenue it brings into the coffers. It's futile. Just accept it. Buy a gas mask.
Don Bain (the o... wrote on February 18, 2013 - 12:29pm Permalink
"The only thing that can improve US energy security is reducing our consumption of oil – pure and simple – not by proceeding to dig up the worst quality crap we can find and then ship it cross continent in a vulnerable pipeline." I appreciate your frankness. We have lots of opportunities to improve efficiencies, reduce consumption and create nega-barrels. Let's do those, and create a more resilient economy and workforce in the process. I have high regard for our Canadian neighbors. Given their demonstrated sensibilities, I am curious why the tar sands extraction continues? Once again, I am pleased to share the same name when I read your work. Please keep it up. Don Bain (not the writer, not the photographer, ... the engineer)