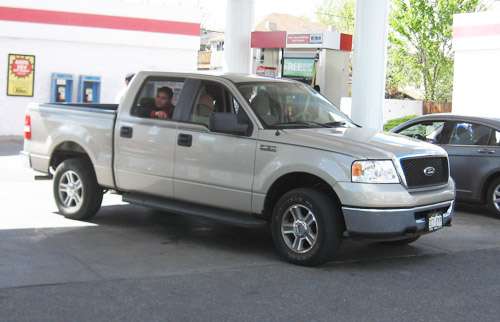 Cowboys and Southerners have the least green cities of all

A study by Cars.com of consumer auto buying habits reveals the least green streak in cities among the Cowboy states of Texas, Wyoming and Montana, as well as the Southern states of Georgia, Alabama, Mississippi, Louisiana, Virginia and West Virginia.
Advertisement

Not that everyone in Texas, Wyoming or Montana is a cowboy or that there’s anything wrong with that occupation or lifestyle. It just makes a great headline, don’t you think?

The study quantified car searches on the site by users for vehicles getting 40-mpg or better to help identify the greener states. Those with the lowest overall mpg for the vehicles searched by region determined the least green for the website’s purposes.

Some of the cities on the list make perfect sense when you stop to think about it. You wouldn’t buy an electric vehicle if you lived there either. Others are puzzling as to why they are among the least green.

The least green title goes Odessa-Midland TX/NM, followed closely by Laredo, TX, subject of the famous cowboy ballad. So when you walk out in the streets of Laredo, take care some big pickup doesn’t run you down, especially if you’re from Laguna Beach.

Third place goes to Fairbanks AK, a haven for free thinkers of a particular type. The historical stereotypes of fur trappers, prospectors and raggedy-ass miners has a lot in common with Colorado, but it’s nowhere on the list as the latter has a mix of people from all over, as diverse in the vehicles they choose as the states they come from.

The medium size city of Albany GA, roughly 100 miles north of Tallahassee FL, gets fourth place thanks to the preponderance of pickup trucks.

"The hard-workers in the South need their pickup trucks," according to Patrick Olsen, Editor-in-Chief for the website. "For these workers, a hybrid or fuel efficient vehicle would likely be a second car, and that's just not as feasible for many in this economy."

To a great degree this does apply to many Southerners, but we can’t dismiss the presence of a cultural factor wherein pickups are clearly seen as a status symbol or political statement. This is repeated in many states as people buy pickups not based on the demands of work or leisure, but rather as some form of personal identification not easily understood. Whatever it is, they are willing to pay for it again and again at the gas pump.

In fifth place for least green cities, we find the geographically disparate Beckley and Bluefield W. VA along with their somewhat coastal counterpart at Oakhill VA.

In this part of the country the topography itself would tend to justify the purchase of a pickup or SUV despite the mild winters. The elevation of West Virginia is on average 1,500 ft, the highest of any state east of the Mississippi River. The topography varies from Spruce Knob, rising 4,861 ft over sea level down to a point on the Potomac River in the vicinity of Harpers Ferry at a mere 240 ft above the Atlantic Ocean.

Glendive MT takes sixth place from its position on the high plains, 165 miles northwest of Billings, in an area where endless herds of American Bison once had their winter grasslands. In the rugged north, winters are such that we don’t blame anyone for having a vehicle that will plow through a six-foot snowdrift – it might save your life someday. Even buffalo were smart enough to head south when winter came to Montana. Unfortunately, most of us can’t just wander about looking for the sweetest grass (though come to think of it some do give it the old college try!)

The beautiful forest encircled municipality of Helena MT, which lies 65 miles north and a little east of Billings, also has a tendency to killer winters and if you ever leave town you want something with four-wheel-drive and a big gas tank. There’s just no two ways about that for the location in seventh place.

Columbus AL along with Tupelo and West Point MS take eighth place and why is simply beyond comprehension – go figure!

In ninth place is Casper and Riverton WY. Again the winters are formidable, but Riverton is on the Wind River Indian Reservation where the indigenous Americans drive whatever they can.

Notably, I met a Native American in Montana returning from a trip to Glacier National Park. This affable, friendly man named Conrad, brought his family to our campsite in a nearby state park and cooked moose for my wife and I.

He showed me his ID, explaining as a Native American he had the right to hunt any legal game animal anywhere in the U.S. any time of year. If you’re going to fill the larder with big game like moose or elk, you’re not going to own an urbanite’s green vehicle.

Incidentally, he took a fair chunk of roasting meat, boiled in a pot for about 30 minutes and the result was like God’s own beef. Best meat I ever tasted. I remain indebted to Conrad for that experience to this very day.

Bringing up tenth is Baton Rouge LA. You’d think after the BP oil well spill, they’d have had enough of anything having to do with the toxic, sticky stuff, but that’s simply not the case.

The greenest cities and states are not too surprising – San Francisco, Oakland and San Jose top a list that includes seven out of ten from California and Oregon. What is surprising is Madison WI coming as the second greenest in the nation along with Green Bay and Appleton WI in seventh.

Would you believe Zanesville OH took the 10th spot for greenest city? Appropriately the town is name for Ebenezer Zane who built one of the earliest roads in the state known as Zane’s Trace over 100 years before the first automobiles crept into the area.

So maybe hybrid, high-mileage or electric cars don’t work for you – such is life. However, with Earth Day looming this Sunday, there are always ways to make a difference. Reduce, Recycle, Repurpose, Reuse and most of all Rethink!

Do it for your childrens children and those who follow.

For the record, we heartily appreciate the environmental efforts of Ford and the fact that one of their trucks is in the photo above has no editorial intent – it was simply the truck that happened to be at the station when I went to get such a shot.

Toyota's First EV Will Have a Name of BZ: Toyota BZ
First Videos From Inside The Boring Company's Las Vegas Loop
END_OF_DOCUMENT_TOKEN_TO_BE_REPLACED