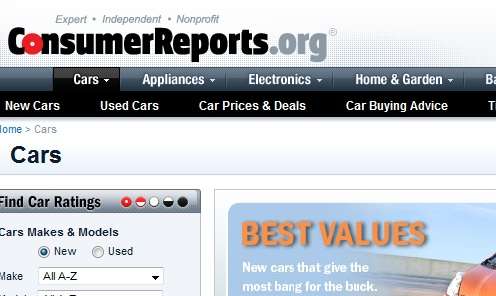 Consumer Reports is in full support of a new Crash Avoidance System being developed by a collaboration of government, universities and automakers, that involves vehicles communicating between themselves, essentially mapping out etiquette and right of way concerns even if their drivers don’t.
Advertisement

In the not so distant future, you may try to run a red light but the car you’re driving might not let you break the law. The system is discussed in the magazines Annual Auto issue, available next week and online today.

Consumer Reports has always been firmly on the side of safety and the National Highway Traffic Safety Agency projects the new technology could prevent up to 80 percent of accidents. It works by two cars talking to each other as they approach an intersection that might go something like this.

Camry: I am approaching the intersection of Broadway and Main from the south at 29.78 mph – ETA 5.43 seconds.

Sonata: I am also approaching Broadway and Main from the West, but am behind a building so your driver cannot see me. Speed 35.32 mph, ETA 5.36 seconds.

Camry: The light will be in my favor but will your driver stop?

Sonata: Driver has responded to yellow light by accelerating. DANGER! Impact imminent UNLESS YOU STOP!!!

Eventually, even if the Sonata driver stomps on the accelerator the car will automatically come to a stop, probably with a sonic alert and the announcement of something like, “Crash Avoidance System activated” or “Driver input interrupted.“

Mentally, you may hear a smarmy robot voice going, “Nyah, nyah, stupid human! Your car is smarter than you are!” After all, artificial intelligence can’t have matured beyond pre-adolescence as yet – or has it?

Of course it will work with less intrusion at first – simply alerting the Camry driver a car is coming that may not stop for the light and using a Danger alert to suggest a stop before proceeding through an unsafe intersection. Chances are one will lead to the other as people don’t like machines bossing them around, but it is ultimately preferable to seeing your peeps leave the scene in an ambulance.

Currently the system is referred to as vehicle-to-vehicle communication or V2V, but a system is also in the works to allow cars to communicate with roadside infrastructure, such as traffic lights, construction and school zones. When both systems are combined they are referred to as V2X. (Could we call it vehicle-to-crossing?)

Two staff members from Consumer Reports were afforded the opportunity to check out V2X technology firsthand, with one driving eight V2X vehicles from varied manufacturers in a NHTSA driver clinic in Alameda, CA. The demonstrations illustrated how the Crash Avoidance System can help in situations like passing safely in traffic, alerting the presence of a vehicle in your blind spot, or avoiding a red light runner.

The other CR representative experienced Ford's Intelligent Intersection in Dearborn, MI illuminating how vehicles communicate with infrastructure as well as each other. Both were quite impressed with the potential of the Crash Avoidance Systems to save lives and prevent injuries.

There are related systems already existing in Dallas, Minneapolis, San Diego and Seattle that employ traffic management programs to provide real-time data on travel time or lane closures that is then fed to digital signage on the roadways. In Minnesota, such a system has reduced gridlock by directing drivers around slowdowns.

In Seattle, a traffic-signal-priority system is used to give emergency vehicles the right of way through intersections, keys signals to buses, and synchronizes stoplights to improve traffic flow.

Similar systems are being used to gauge the weight of 18-wheelers, saving gas and time by simply driving over sensors that report the truck's weight.
Naturally, the national implementation of such systems is years away. Questions of privacy and the security of such a system must be addressed. Hackers could put us all in a world of hurt.

"These systems are being aggressively developed because they could be the next big safety breakthrough," said Rik Paul, automotive editor for Consumer Reports, "But adequate oversight of how the information is used is essential to ensure the privacy of drivers and to prevent abuse."

Thus, long before we have robo-cars, we will have Crash Avoidance Systems. The computers in the cars we drive will begin to talk with each other and their physical environs. So begins the revolution.

To see the full story, click here. The issue will be on the stands Feb. 28th should you desire a hard copy.

LG's New EV Battery Plant Is a Welcome News for Tesla
Tesla Giga Berlin's New Hurdle: It's Not Only the Gov't, but Now Tesla Itself
END_OF_DOCUMENT_TOKEN_TO_BE_REPLACED