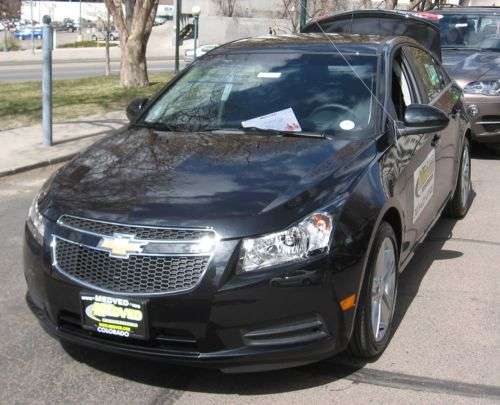 The Chevrolet Cruze took the top sales slot in July by retailing 24,648 cars, outperforming the Toyota Corolla, Hyundai Elantra and Ford Focus while surprisingly outselling all cars of any size in June.
Advertisement

The Cruze was the best-selling US compact priced as low as $16,525, right between the Corolla and the Prius, and still delivering roughly 30 miles to the gallon, if not more.

An article posted on GulfNews.com today, attributed only to Bloomberg, cites Mike Sussman as representative of the buyers bringing General Motors back into the compact car business.

A 45-year-old systems analyst in Southfield, one of the many suburbs of Los Angeles, just traded his Toyota Prius for a new Chevy Cruze, reportedly wanting more power while still getting good mileage.

"I was very, very leery about buying US, to be honest," Sussman is quoted as saying. "They got me with the mileage. It actually drives like a regular car. With a Prius, you always feel like you're driving a science experiment. It just doesn't have a lot of guts."

The company's rise in the small car market, never one of the auto group's outstanding attributes, is a portent of the automaker’s revival and economic viability. GM's U.S. market share expanded to 20 percent in the first seven months of 2011, from 19.2 percent over the same period last year.

According to Autodata, passenger cars accounted for 42 percent of GM’s sales, contrasted with 39 percent last year.

Though their position in the market was surely helped by the natural disaster in Japan, which delayed production for Asian brands and supply lines even for some U.S. manufactures. GM has benefited from a general improvement in their lineup, enhanced market relevance as well as bad publicity for their stiffest competition from rival Japanese corporations.

"We're competitive for the first time ever," Joel Ewanick, GM's chief marketing officer, said in an interview. "The buyers are completely different than we've seen before."

"If the vehicle you want isn't on the showroom floor, who knows if you're going to be waiting for the deliveries to come in when there's something equivalent in terms of performance capabilities and fuel-efficiency?" said Chris Hopson, analyst with IHS Automotive, a research firm based in Lexington, Massachusetts.

Both GM and Ford are adding more high-tech features to their compact cars making them more attractive to buyer than previous low-priced economy models.

Ford has been pushing the Sync voice-activated telematics system in the Focus since its introduction in 2007 as well as the Fiesta ever since its U.S. debut in 2010.

General Motors Co. is extending a temporary shutdown of its Indiana full-size truck plant, while adding shifts to a pickup factory in Michigan balance out the inventory on dealer lots.

The Fort Wayne Assembly, where the Chevrolet Silverado and GMC Sierra are built in Roanoke, IN, will close the last week of 2011 and the first week of 2012, according to a UAW spokesperson. Saturday shifts at the plant have already been cancelled for the year.

GM is reallocating the mix of trucks as it cuts down full-size truck inventory. GM is a planning a 90-day supply of Silverados and Sierras by year’s end, down from 115 days last July, according to Don Johnson, GM's vice-president of US sales.

They are planning to add some Saturday production days in September and October at the Flint Assembly Plant, where the four-door crew cab models are built.

GM, revealing their recently sharpened business acumen is wisely trimming truck inventory through production adjustments rather than incentives.
The economy over the next few months will have a major impact on sales of passenger cars, light pickups as well as heavy trucks.

For a further examination of these trends, click here.

P.S. – We have to add our experience with Prius models does not reflect Sussman’s. Cars do have an effect on the psyche, however, and the question here comes down to was Mike driving the Prius or was the hybrid telling Mike how to drive? Today's Prius comes with Normal, ECO and Sport modes, meaning you can drive sensibly if you want to, but it's not the only choice. Even if you "hotrod" the Prius, you should still get 40-mpg. Still, different strokes work for different folks, no?