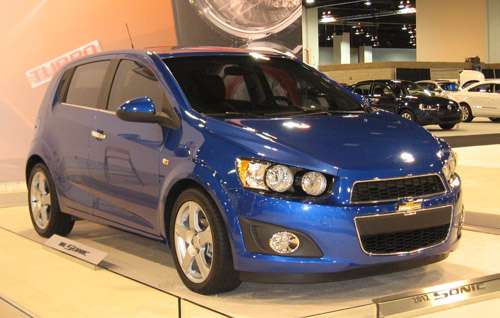 With all the sales reports in, Chevrolet came out number one among all U.S. automakers in passenger car sales in 2011.
Advertisement

Chevrolet posted its best annual retail sales increase in 35 years, largely thanks to a literal breakthrough in their business model - they have finally learned to build small cars that will not only sell but realize a profit. The proof is in the strong sales of the Cruze compact sedan. Sales of compact cars by the brand nearly doubled over 2010.

“Leading the U.S. industry in passenger car sales in our centennial year proves that we have transformed the Chevrolet product lineup and are delivering the high-quality, fuel-efficient, expressively designed cars that more and more people want,” said Alan Batey, U.S. vice president, Chevrolet Sales and Service, according to a post by Kensei on Las Vegas TSG Business News.

Chevrolet sold in excess of 763,000 passenger cars during 2011. This included models such as the subcompact Sonic, Cruze, Volt electric hybrid, Malibu and Impala sedans, plus Camaro and Corvette sports cars.

“We are confident we can continue to build on the momentum with the new Sonic and the new Malibu Eco arriving in dealer showrooms in the coming weeks,” Batey added.

U.S. sales of the Chevrolet Cruze totaled 231,732 last year, contributing greatly to the company’s global success. As the best-selling Chevrolet nameplate, the Cruze has sold over 1 million units in the three short years since it’s launch.

This is remarkable for the company whose bold and innovative attempt to design a rear engine, air-cooled automobile in 1960, namely the Corvair – the American answer to the popular VW Beetle – was so unsuccessful. If the ill-fated Corvair had not been unfairly torpedoed by Ralph Nader in Unsafe at Any Speed, the brand’s subsequent history might have been very different.

Another fact contributing to Chevrolet’s sales leadership is the placement of the Chevrolet Silverado pickup as the second best selling vehicle in the U.S. with over 415,130 sold, a 12.2 percent jump from 2011.

The refreshed fifth-generation Camaro is doing well to for its place in the market, resonating with its following to the tune of 88,000 sales, up 8 percent from last year.

The all-new Sonic posted a 52 percent jump up and over the vehicle it replaced, winning a great many fans in a crowded market segment. The Sonic is even a social media success with over 200,000 Facebook Likes posted. The model’s sales increased monthly, putting it near the top of its segment in December.

The 2011 sales momentum extended to the Equinox crossover, up 28 percent, and the full-size Suburban SUV, with sales up 9 percent.

Coming in 2012, the brand will introduce include the 2013 Spark, an electric super-compact expected late this fall and the refreshed Malibu sedans as the brand extends its market targeting on a global scale.

Having just celebrated a 100th Anniversary, Chevrolet is now one of the largest car brands in the world, selling over 4 million cars and trucks in 140 countries during 2011. In the short time since the Federal Bailout, Chevrolet has returned to profit with a renewed lineup of vehicles, from the small and fuel-efficient to the big, powerful and versatile. They are demonstrating a deeper understanding of the industry today and a heightened awareness of the market they’re competing in globally.

They, along with the taxpayers who came to their aid, have a lot to revel in.

LG's New EV Battery Plant Is a Welcome News for Tesla
Tesla Giga Berlin's New Hurdle: It's Not Only the Gov't, but Now Tesla Itself
END_OF_DOCUMENT_TOKEN_TO_BE_REPLACED