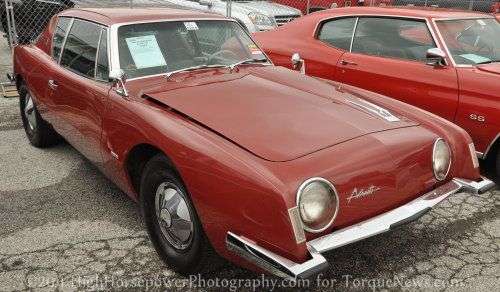 Celebrating the lifework of Raymond Loewy

Raymond Loewy is considered the “Father of Industrial Design,” and had an immense impact on the width and breadth of American institutions, products, goods and services. The man whose work spanned seven decades of American productivity would have celebrated his 118th birthday last Saturday if not for his death at 93 in 1986.
Advertisement

Loewy was born in France, but spent his professional career in the U.S. He started out by doing window displays for New York Department stores like Macy’s and Saks and submitting fashion illustrations for Vogue and Harper’s Bazaar.
Over the next few years, he would redesign the mimeograph machine, design the Coldspot refrigerator for Sears, the Hupmobile for the Hupp Motor Company. After a time spent designing locomotives, Loewy began a long association with Studebaker.

After redesigning the brand’s logo with the once familiar lazy ”S,” Loewy contributed to the automotive design over the next several years working with the company’s designers.

His design of the 1953 Starliner Coupé is still heralded as one of the most timeless automotive designs ever, which even the Museum of Modern Art labeled “a work of art.”

"I believe one should design for the advantage of the largest mass of people, first and always,” he once said. “I think one also should try to elevate the aesthetic level of society. And to watch quality control always, while insisting others do, too."

In 1963 his team’s design of the Studebaker Avanti turned the world on its ear.

He scoffed at the design of the Big Three at that time, unabashedly calling their work "Jukeboxes on wheels, aesthetic aberrations that masked the workings of the machine beneath the layers of tawdry flash. He added later, “I alienated the automotive industry by saying that cars should be lightweight and compact. I'd also kill chrome forever, or any other applied junk."

"Through his talent, the force of his personality, his charm, his energy, his flair, his Parisian air, his genius for promoting himself and his profession, and his ability to intermediate so well between so many worlds, Raymond Loewy bestrode the profession he had helped created. More than any other individual, he was responsible for convincing business of the importance of design," wrote author Glenn Porter in his book, Raymond Loewy: Designs for a Consumer Culture.

He also designed the Exxon and Shell logos, the latter of which became so iconic the petroleum firm deleted their name from their advertisements.

"We know that logic alone does not sell automobiles, so its immediate appeal is emotional; sheer elegance and design finesse, the wish to feel its slender curves, to love that car, to be known as its discriminating owner," Loewy said. "Style for the sake of style alone will have less meaning to the consumer than value. An interruption of the spiral created by boosting sales from year to year with false inducements of style, bulk and flash gives design a new lease on life. Aesthetic beauty will be the direct result of careful planning and precision manufacturing."

So as the auto industry travels through its second century and makes the conversion from gas to electric power and/or other alternative fuels, they might well take heed of Raymond Loewy’s advice when he said: "The adult public's taste is not necessarily ready to accept the logical solutions to their requirements if the solution implies too vast a departure from what they have been conditioned into accepting as the norm."