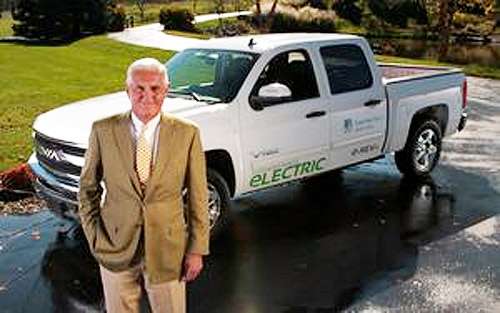 "VIA Motors has developed the first extended range electric powertrain capable of replacing the V8 engine, Lutz remarked. “It was my great privilege to introduce the Chevy Volt, and it will be a great honor to introduce the world's first line of eREV Trucks, Vans and SUVs by VIA Motors."

Since leaving General Motors in 2010, Bob Lutz has continued to develop longer range electric vehicles as he joins the Board of Directors for VIA Motors. Recognized for his role in developing some of the most iconic American "muscle cars," such as the Chevy Camaro and Dodge Viper, Bob Lutz is also considered the trailblazer for GM's triumphant release of the Chevy Volt. Lutz is known for his sharp understanding of what Americans prefer to drive and the desire to adopt cleaner, more efficient technologies.

"This new breed of full size utility vehicles can deliver the power and performance of a V8, with better fuel economy than many smaller cars, by driving on electricity for about $2 a day," said Alan Perriton, Chief Operations Officer for VIA Motors, and a former senior executive at GM. "It actually costs less to own and operate a clean VIA electrified truck or SUV than a gas truck,"

In addition to their full size Pickup Truck, VIA will unveil two unique new eREV vehicles at the NAIAS – a full size, four wheel drive SUV, and a three-quarter-ton, full-size Cargo Van. Using the same approach as the Chevy volt, the three vehicles can drive 30 to 40 miles on lithium ion batteries, with up to 400 additional miles available thanks to the onboard generator, which can get up to 100 mpg.

VIA Motors is a privately held electricvehicle development and manufacturing company. VIA has developed a proprietary 650-volt eREV drive system technology designed for full size trucks and SUVs called the VIA V-Drive(TM). VIA employs a streamlined second stage manufacturing process to integrate its proprietary eREV powertrain technology into new OEM vehicles it calls VTRUX. VIA will target initial sales directly to fleets, then later to consumers.