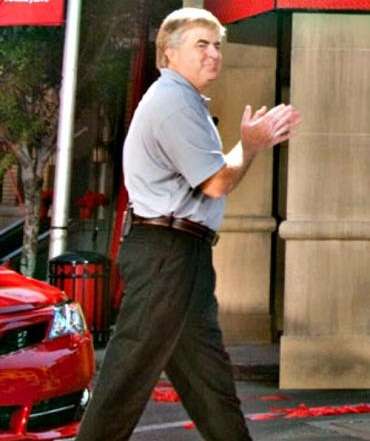 Bob Carter, Toyota Division Group vice president and general manager, was on hand for the 2012 Toyota Prius Plug-in media preview at the Green Drive Expo, held today in the Craneway Pavilion in Richmond CA. Among the usual promotional hype Carter had a few interesting things to say.
Advertisement

Notably Toyota is a major sponsor of the Green Drive Expo, slated for tomorrow and was last year as well.

“It is a great opportunity for us to showcase our environmental efforts to an enthusiastic group of people,” Carter said. “It’s those enthusiasts who really helped make the Prius the success it is today.”

The Craneway Pavilion was first a Ford assembly plant that opened in 1932, the same year the brand introduced the flathead V8. There wasn’t even a thought of emissions regulations and gas went for an unbelievable 10 cents a gallon. In 1932 total car and truck sales were around 920,000.

“While this building is a ghost of the past, the Prius Family is the spirit of the future," he said. “Unlike 1932, CO2 emissions and energy policies are now a big factor, and Toyota is the industry leader in environmental and fuel-conservation technology.

“Toyota made a commitment to the environment more than 20 years ago by investing in hybrid technology, and the first Prius went on sale in Japan in 1997. Three years later, Prius reached the U.S., and there were some in our industry that didn’t give it a serious thought.”

Today most major auto manufacturers have at least one hybrid in their line if not several. Much of the Toyota Prius’ early success came from sales in the San Francisco region where the Green Drive Expo is taking place. That was a portent of the million hybrids the Toyota Prius line would sell in the U.S. over the next 11 years.

“The Bay Area was home to many of those early Prius enthusiasts,” Carter added. “The first buyers of Prius included environmentally conscious people but also technology engineers in and around Silicon Valley. Early on, 1 of 3 Prius were sold in California; popularity still remains high with 1 of 4 today. While Camry is widely known for being our best selling model in the U.S., Prius has actually outsold Camry in Northern California the last four years and so far this year as well.

“If I asked you to guess which dealership was the first to sell more Prius than Camry, you probably wouldn’t be surprised to find out it was a dealership here in the east Bay. But if you had to guess when that first occurred, most of you would be surprised that it was as early as 2001… the second year of Prius existence here in America.”

He revealed that in the San Francisco Region, they sold 32 percent more Prius than Camry models last year. In the rest of the country Camry outsold Prius two to one.

“Prius has the highest brand awareness of any hybrid, literally defining what a hybrid vehicle is, with one out of every two hybrids sold in the U.S. being a Prius. Since it first went on sale, more than two million have been sold worldwide, including more than 1 million here in the U.S. And one of the things I’m most proud of, and an area some early skeptics questioned, is that in the U.S., 97-percent of all Prius sold are still on the road today.”

Part of the impetus for the media event today is the simple fact the company will begin taking online order for the Toyota Prius Plug-in next month.

“Last April, we launched the Priority Registration site on Earth Day, and received a great response with 42,000 people expressing strong interest in the Prius Plug-in,” Carter added. “Our goal was to provide a great customer experience for our early adopters and provide the first steps leading to picking up their new Plug-in at their local Toyota dealer.”

Carter closed out his comments with a reference to the next “green vehicles” coming from the brand. These include the iQ EV and the collaborative effort with Tesla on theToyota RAV 4 EV, which had its pre-production debut at the Los Angeles Auto Show last November.