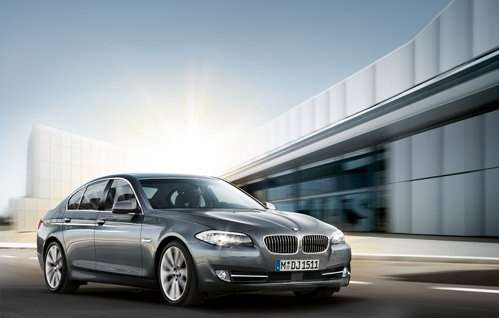 The National Highway Traffic Safety Association has reported BMW recalling 367,000 5 and 6-series models from 2004 to 2010 for a battery cable that can loosen causing a fire hazard and recommends parking the cars outside as a precaution.
Advertisement

The trouble stems from a battery cable in the trunk compartment that tends to heat up if loosened, possibly resulting in a smoldering fire in the floor mat.

"We've got one known case of actual fire here in the U.S., having sold 367,000 cars," BMW spokesman David Buchko told Tom Krisher of the Associated Press

According to the Detroit Free Press, the recall in the U.S. is but part of a much larger action announced Monday by the German automaker involving 1.3 million cars worldwide. The company is aware of only the one fire in the U.S. as a result of the faulty cable. No injuries have been associated with the problem and parking the cars outside is simply a sensible precaution.

The problem is of greatest concern in 5-series sedans, though is also a potential risk for 5-series sport wagons and 6-series convertibles and coupes.

According to NHTSA documents, BMW investigated incidents in Sweden and Germany during 2006 without identifying a cause. No fault was found either during further examination of U.S. incidents during 2009 and 2011.

In April of 2011 a task force was appointed to identify the problem and 11 months later discovered a cable linking battery cables in the trunk was the apparent cause of all the previous incidents.

It is interesting to notice that fire hazards were rarely mentioned since the inflammatory press the ill-fated Ford Pinto received years ago. It seems since the Chevy Volt was labeled with a rather exaggerated level of fire risk, events have surfaced to reveal the reality that all cars present something of a fire risk.

Cars have contained both gasoline and electricity for a long time with an overall low risk of fire. With power in its many forms, comes the need to show it respect by using power responsibly.

The Ultimate Driving Machine provides exhilarating performance with which certain known and manageable risks are associated. The NHTSA endeavors to remove the unknown risks.