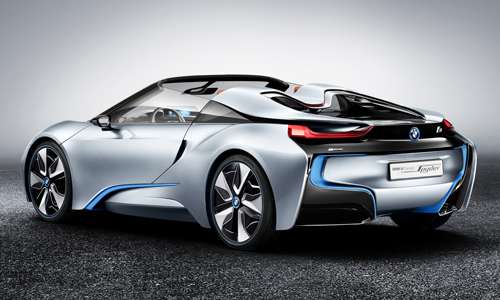 After the BMW i8 Roadster won the North American Concept Car of the Year Award last year, it has proceeded to be named the Best Production Preview Vehicle by a virtual Who’s Who of automotive journalists.
Advertisement

To be named in the Production Preview category, a vehicle must have already been announced or planned for production.

Categories include the best Production Preview Vehicle, Concept Car, Concept Truck/SUV, Specialty Concept and Most Significant Concept Vehicle for each auto show season, during which all models considered must have made a North American debut.

The North American Concept Vehicle of the Year Awards are intended to provide valuable insight to the automotive industry by focusing the expertise of 24 of the best read and most influential auto journalists, pundits and photographers on the continent.

These authorities look at the overall package to arrive at a conclusion – design, style, materials, technology, market viability and market responsiveness.

The BMW i8 Roadster is an obvious choice with its devilishly good looks and the combination of traditional BMW performance values with modern electric hybrid drive.

By combining lightweight design with state-of-the-art hybrid technology, BMW infuses the soul-stirring Roadster with true sports car performance, while it sips at its fuel like a tiny urban commuter.

The BMW i8 Concept Roadster has upward-swinging, windowless doors and numerous accessories including electric kickboards stashed under a see-through tailgate.

It is a plug-in hybrid combining a high-performance electric motor and gasoline combustion engine that can produce up to 354 horsepower (260 kW).

We think the Awards jury did well, don't you?