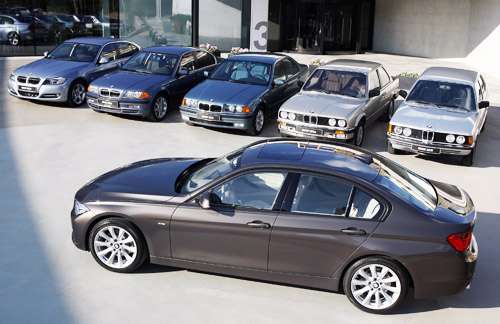 BMW DNA shines through six generations of the 3 Series

For over 35 years, the BMW 3 Series has been one of the top selling cars in its segment, thanks to the primal DNA that makes it a BMW, even though its face may change over time.
Advertisement

That DNA runs deep, predating even the 3 Series in the evolution of the BMW and going back to the BMW 1600 in 1966, which turned into such revered models as the 1600ti and 2002tii. These were the models the 3 Series replaced - the forerunners of the breed.

When the first examples of the BMW 3 Series were released in July 1975 a track record began that few have equaled since. The 3 Series is the most successful prolonged model line in the brands corral. Despite its resemblance to the 1972 BMW 5 Series, the new E21, first of the line, was something entirely new – a compact executive sedan with the spirit and power of a thoroughbred. Through successive generations one predominant design feature has made the Series unmistakable – the BMW kidney grille.

E21: 1975–1983
The design of the first in the BMW 3 Series was striking thanks to large windows, a wedge shape popular at the time and, of course, the BMW face – with complimentary contour lines continuing along across the hood. With short overhangs and a track width of 1.364 meters, the new sports sedan seemed to be slung low like a gunslinger’s holster.

BMW promoted the new design with the words, “Timeless and without superficial gallery play, the design of BMW 3 Series will also become a trendsetter for the next decade.” Few copywriters can claim to be more prophetic, though in retrospect he should have written “for decades to come.”

E30: 1982–1993
The second generation of the BMW 3 Series was the most long-lived of the six. The result of carefully enhanced design and improved aerodynamics long before it was in fashion, the new model had the improved looks resulting from selective breeding. The extra 35 mm track width gave the model a more athletic look, smoother and rounder, with a sleek front end resulting from extensive wind tunnel testing, gaining a 0.37 coefficient of drag.

The BMW DNA in the kidney grille was elongated with the double headlights now standard on all 3 Series models pushed far to the outside. The smooth fit and finish of all adjoining body surfaces not only revealed its good genetics, but also enhanced airflow around the vehicle. The low-set hood, with a wide scoop rising gently across it, lets air slide smoothly over its surface uninterrupted by air intakes.

E36: 1990–1997
By 1990, the BMW DNA had found the time to grow and develop, taking a meaningful shape in the complex world of the day. The sports sedan was completely reconceived – dimensions increased all round – surprising buyers and yet pleasing them at the same time. Now the headlamps are conjoined behind a glass cover, while the wedge shape continued with a lowered hood and raised rear deck. Windows were now installed flush to the car body and a targeted diffuser cooled air within the engine compartment and further lowered the drag coefficient to 0.29. This E36 had little in common with its predecessor, but the DNA still carries forth intact. It was still clearly a BMW, even though the trademark grille was now flatter and wider.

E46 1998–2005
When the fourth generation launched in May 1998, the compact sports sedan was gaining girth by some 40 mm – even the track width was 60 mm wider than its predecessor. Design changes were subtle with the grille more fully integrated into the hood and rounded headlights still glared from behind clear glass. Lower headlight surrounds form a distinct separation – exterior bodywork cues are echoed by slight curvatures, creating a clearly visible interruption of the horizontal line over the bumper.

E90-93: 2005–2011.
The fifth generation launched in 2005 and the BMW DNA was born into a BMW 3 Series of strong character exuding more presence and power than its forebears. Within a year of its release, the progressive design gained a high level of recognition, in the World Car of the Year award in New York. “Within the series, the design has consistently developed in both small and larger steps,” remarked a member of the design team. “The new 3 Series represents a particularly high level of advancement in the vehicle’s design history.” Though the E90 represented a significant evolution of the breed, it is still an obvious member of the classic 3 Series lineage.

From 2011
The sixth generation of the BMW 3 Series is the fulfillment of the line’s potential, expressing the essential qualities of agility and performance-based dynamics in a whole new way, yet still bearing the DNA with roots back to the Sixties. The large integrated radiator cowling, embedded headlights and distinctive grille also marked the face of the first in the line. Only the sports sedan in 2011 has modern dual headlights with LED eyebrows extending all the way to the grille frame. The supple, arched back of the hood gives the vehicle the fierce impression of a large predatory cat, eyes glowing through the darkness. Now, instead of a central air intake, the new BMW 3 Series has larger air intakes below the headlights. Enhanced airflow around the front wheels creates a reduction in the coefficient of drag to 0.26 and a corresponding improvement in fuel consumption at high speeds.

Across the span of over 35 years, the current BMW 3 Series has remained true to its roots and the spirit in which it was conceived. Then as now, design gives the executive sedan its styling and personality, expressing contemporary dynamics, innovation and superb aesthetics. Though each is different in its own way, the 3 Series DNA continues to shine through, clearly identifying each generation as a member of the same proud family of performance vehicles.

LG's New EV Battery Plant Is a Welcome News for Tesla
Tesla Giga Berlin's New Hurdle: It's Not Only the Gov't, but Now Tesla Itself
END_OF_DOCUMENT_TOKEN_TO_BE_REPLACED