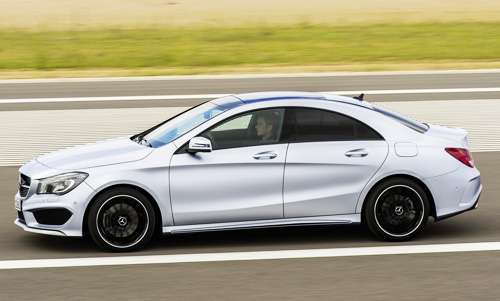 BMW and Mercedes-Benz have traditionally built rear wheel drive vehicles, a trend that may end as both brands intend a move towards front-wheel-drive models over the next few years.
Advertisement

It had to happen since the rest of the industry adopted front-wheel-drive long ago simply to increase mileage and efficiency.

Mercedes-Benz trotted out the new compact CLA250 in Detroit last Monday, a four-door coupe and the first ever front-wheel-drive vehicle with the world famous three-pointed trademark in the grille, according to Jerry Hirsch writing in the Chicago Tribune.

New technology has improved front wheel handling, stability and dynamics, while the real reason for the change is mounting economic pressure to cut costs and increase gas economy.

Front wheel drive vehicles from both brands should begin to appear in US showrooms this year or next, with competitively low prices in the luxury market.

The move is an effort to gain market share in the US and beyond. Last year, the two luxury brands captured almost four percent of the 14.5 million in US auto sales, without a single front-wheel-drive model in the mix.

It is interesting to note that just two years ago, BMW CEO Norbert Reithofer confessed 80 percent of the buyers of 1 Series vehicles believed them to be front wheel drive, even though the maker made no such claim, according to a blog by Todd Lassa of Motor Trend.

There are numerous hardcore holdouts that insist rear wheel drive is more responsive and more weight balanced, but the downside is the expense of building two powertrains and multiple platforms.

Front wheel drive performs better in inclement weather and more efficiently drives the vehicle, all in all.

Take for instance how another German brand, namely Audi, has moved firmly into the realm of front and all-wheel-drive with their model lineup. This along with precise fit and finish, cutting edge technology and competitive value in the market are propelling strong sales growth.

"That has gotten the attention of BMW and Mercedes-Benz," Dave Sullivan, manager of product analysis for research firm AutoPacific Inc, told the Tribune. "You can sell a lot of cars around the world with a really good front-wheel-drive car."

That is doubtless what Mercedes has in mind with the CLA 250. The same platform used for other market models will come to the US on four different Mercedes models over the next few years, according to Steve Cannon, chief executive of Mercedes-Benz USA. Among these first few models will be a compact crossover due out next year.

"We never brought those platforms to the U.S. because they did not meet the brand image here," Cannon said. "They were small vehicles, very utilitarian, that did not deliver on the style and attributes of the brand."

That will all change when the brand begins to bring front-wheel-drive models to the US.

When it appears in US showrooms this year, the CLA 250 will feature a 2.0-liter, turbocharged, direct-injected four-cylinder engine developing 208 horsepower with 258 lb-ft of torque. The high output four-banger will be mated to a seven-speed, dual-clutch transmission, with sporty shift paddles. An all-wheel-drive variant will become available in 2014.

Without stating a specific price for the vehicle, Mercedes throws out the ballpark figure of $30K, slightly less than the $35,350 they charge for the larger C-Class sedan.

The stated purpose is attracting Americans to the line that have never owned and probably haven’t even considered buying a Mercedes-Benz before. Even at the lower sticker price the coupe will come with the brand’s most sport tuned suspension and advanced tech like forward collision avoidance.

Mercedes did their homework before making this groundbreaking move – they found most owners didn’t even know which wheels drove their car.

Shocking, isn’t it, but if you’re reading this you are not most people. It isn’t the drive wheels that make a brand – it really is the fit, finish, quality, performance and reputation it both possesses and projects.

BMW is reportedly working on a vehicle with a working moniker of Active Tourer, leading us to think some things don’t translate from German to English very well. In any case, the five-seat urban vehicle will utilize front wheel drive, without compromising its Ultimate Driving Machine DNA.

The first BMW front-wheel-drive vehicles in the US market probably won’t arrive until 2014, but it’s a day some would have insisted would never come.

It seems BMW and Mercedes-Benz have finally found front-wheel-drive.