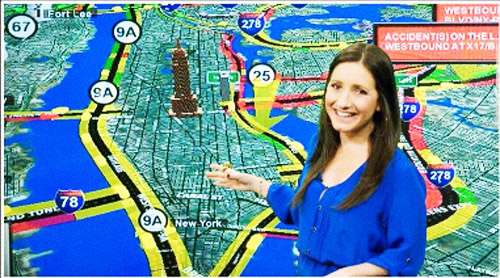 Beat the Traffic returns to the National Association of Broadcasters Convention

Just two weeks ago Torque News reported Beat the Traffic’s milestone of reaching two million downloads, making it the most popular real-time traffic navigation app for smartphones, and now they have returned to the National Association of Broadcasters Convention in Las Vegas to reveal their new 3D app for broadcasters.
Advertisement

The 3D Beat the Traffic application is similar to 3D navigation displays, providing a more immediately understandable traffic mapping view. The application works from user input and automatic data reporting from phones that have the app.

The National Association of Broadcasters' 2012 Show opened yesterday in Las Vegas at the Las Vegas Hotel Central Tower. The popular app was not an overnight success though as this year marks their seventh consecutive appearance at the NAB Show. Triangle Software, developers of the app, will be providing attendees personalized demos of their entire product line in suite #710 hoping to meet new and existing broadcasters who take advantage of their data to get helpful feedback.

"During the seven years since we began coming to Las Vegas, we've seen a monumental shift in the way consumers access technology that has changed their daily lives in very profound ways," said Andre Gueziec, CEO of Beat the Traffic. "We're extremely proud to be a part of this revolution, and we're committed to helping our media partners better engage the public with tools that make traveling more efficient, safe and stress-free."

As Torque News reported last month, Beat the Traffic 2.0 has gotten a makeover along with greater traffic coverage and the ability to save routes and receive personalized traffic updates. The feature called MyRoutes allows users to craft their own preferred and alternate pathways through city gridlock and get reports updated through the day with real-time information regarding accidents and other road delays.

Hosted by the National Association of Broadcasters, the NAB Show runs April 14 to 19 and is the world's largest electronic media show and the development, management and delivery of content across all mediums. Beat the Traffic invites all interested media representatives at the event to stop by its suite #710 in the Central Tower of The Las Vegas Hotel or call 408-777-6540 to make an appointment.

Just looking at the 3D image provided with this information it looks much better than the lame graphics used by most stations we’re familiar with. If you want better traffic reporting in your town, call the stations and tell them you want Beat the Traffic 3D for viewing on your local station.

Chances are they’ll eventually be glad you suggested it.