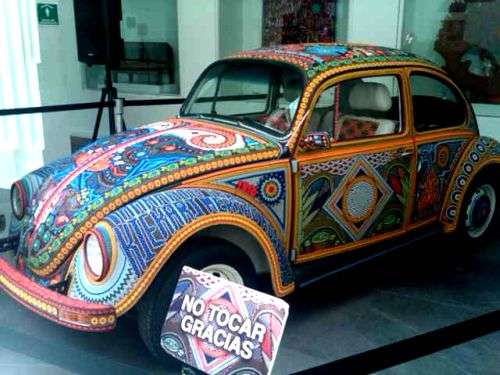 A Beaded VW Beetle to tour US, European museums of art in 2012

The indigenous Huichol tribe of Jalisco and Nayarit, Mexico is known for their exquisite and colorful designs and decorations in beadwork – now they have applied their stylish art to a VW Beetle completely covered with 200 lbs. of the tiny beads as part of a project for the Museum of Popular Art in Mexico City.
Advertisement

The project of bringing the Beaded VW Beetle to a museum came about as a result of the museum president’s visit to Miami.

"We are constantly coming up with projects to raise money so that the museum can have exhibitions and be a lively museum,” said Cecilia Barbara de Moctezuma, president of the Association of Friends for the Museum of Popular Art. “Our president was in Miami attending an auction where a car decorated with little mirrors got a lot of interest and was auctioned at a very good price. When she came back to Mexico, she proposed us to come up with ideas on something that was 100 percent Mexican. So to largely promote the work of the Huichol Indians to the world, we chose to decorate a Volkswagen."

The beads were applied to the car body with polymer glue and it took the father and daughter team eight months to complete the project. After a multiple city tour throughout Mexico this year, the Beaded VW Beetle will tour selected key cities in the United States and Europe during 2012.

The prestigious Smithsonian Institute will be among their U.S. stops. "We are also talking to museums in Los Angeles, San Diego and possibly Atlanta,” de Moctezuma said. “Sometime in 2012 we plan to bring the car to Paris, Berlin, and we'll see about also going to London and Madrid."

Francisco Bautista, one of the Huichol Indians involved in the beading of the Volkswagen Beetle, explains the symbolism of the design motifs on the Beaded VW Beetle, which not only cover the exterior of the car, but the steering wheel, dashboard and even the seats, too, as follows:

• An eagle contained in the many images on the Beaded VW Beetle represents the mode of communication between gods and humans.

• A reindeer’s head and the jicori or sacred cactus represents wisdom and knowledge, offerings to the Huichol elder brother of knowledge.

• The Sun drawn on the headliner of the car is the Huichol grandfather of fire, one of the four cardinal points representing the four elements – water, earth, air, and fire.

• On the backside of the Beaded VW Beetle a flood scene represents the element of water. An Ark features a person, dog and reindeer’s head at the front of the boat. Over the boat a cloud represents Nacahue, mother of all the gods and Mother Nature herself, who caused the flood.

• The Huicholes from Nayarit designed one side of the car in Huichol text celebrating the bicentennial of Mexican Independence.

• Even the tires of the Beaded VW Beetle include symbolism – a two-headed eagle that in Huichol culture means it perceives on two levels. The tires also have designs of the jicori and scorpions that represent the guardians of grandfather Sun.

Preserving and Promoting the Huichol Culture
"I would like to call Mexicans to appreciate further the value of the art we bring, and to start promoting our Wixarika culture, to recognize it, to know about it, and to value and respect our sacred places that have been there for many centuries that we have maintained throughout many years," Baustista said. "We represent the maximum expression to our municipality, our state, as well as our country"

The Beaded VW Beetle also represents the wonderful textiles and crafts of the Huichol women. Bautista's daughter, who decorated the top front section of the car, told MexicoToday, "I am very proud to be part of this project because it is something that will transcend to the world, and we will be known internationally. Even more so as a woman as many times we are often not recognized for the work we do. It is what I really love doing. It is something I gladly do with a lot of respect to my culture precisely because I like it and I would like people from abroad to like it as well," she added.

"We were pleasantly surprised that the Huichol Indians are very spiritual, and they decided to include the cosmology on how they see the world, how they think, all the animals that are part of their lives, and the symbolism into the beaded car,” added de Moctezuma.

The Beaded VW Beetle car is an example of the way the Museum of Popular Art supports and promotes popular arts and crafts, raising awareness about the value it brings to contemporary designs for Mexicans, people abroad and to universal culture.

"One of the goals of the Museum of Popular Art is to preserve traditions, the intrinsic relationship between biodiversity and crafts, as well as promote new projects for artisans and for craftsmen in our country" said Walther Boelsterly, the museum's director. "The artisans from Nayarit and Jalisco have been carrying the pre-Hispanic culture through the generations of their regions, carrying with them the biodiversity from their region and transferring those images into their artisan tools, and how those tools have an intrinsic aesthetic and design, and how these shapes and colors are brought into contemporary designs and arts."