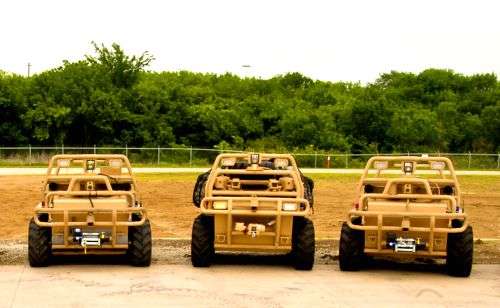 Very soon, when a combat squad advances in Afghanistan, the Lockhead Martin SMSS will follow one particular soldier, recognizing their 3D profile, carrying up to a half ton of needed gear for the advancing troops. This will lighten the soldiers’ load and free their minds for the serious business at hand.
Advertisement

The needs of the armed services are blazing the trail towards robotic, autonomous, self-driving vehicles, which will one day find their way into public and private use.

The U.S. Army Rapid Equipping Force, through the Robotics Technology Consortium, selected the Lockheed Martin Squad Mission Support System (SMSS) for deployment in Afghanistan for an unprecedented military assessment. SMSS will be deployed as the winner of the Project Workhorse Unmanned Ground Vehicle (UGV) competition sponsored by the Army.

The 11-foot-long SMSS is the largest autonomous vehicle ever deployed with infantry, capable of carrying a squad's equipment on rugged terrain, easing the individual soldier's burden by as much as 100 pounds per combatant.

"SMSS is the result of more than a decade of robotic technology development, and we welcome the opportunity to demonstrate this capability in theater, where it can have an immediate impact at the squad level," said Scott Greene, vice president of ground vehicles in Lockheed Martin's Missiles and Fire Control business. "The Army has tested the system's capabilities in three domestic user assessments, and SMSS has been deemed ready to deploy."

As part of the Military Utility Assessment (MUA), four vehicles and a field service representative will support light infantry in theater over three months, to evaluate how autonomous vehicles can support deployed troops. A fifth vehicle and engineering team will remain in the U.S. for additional analysis and technical support. The Army will begin the assessment late this year, after evaluations and training.

"An in-theater assessment is the next logical step in the process of informing the requirements for the Army's future squad-sized UGV developments," Greene added.

Remarkably, A fully-loaded SMSS is transportable on board CH-47 and CH-53 helicopters, providing new logistics capability to light and early-entry forces. The SMSS Block I variant to be deployed, has a range of 125 miles and features three control options: supervised autonomy, telematic operation or manual on-board control. The SMSS sensors allows it to lock on and follow any person by recognizing their digital 3-D profile and it can also navigate terrain on its own with a trail of GPS waypoints.

In addition to a month-long evaluation at Fort Benning, Ga. during 2009, the SMSS has been selected for further evaluation as part of the Army's Expeditionary Warrior Experiment (AEWE) Spiral G in November this year.

While the SMSS has already demonstrated its ability to reduce soldier loads and provide portable power, the November experiment will evaluate the extremely desirable ability to field a reconnaissance, surveillance and target acquisition mission equipment package.