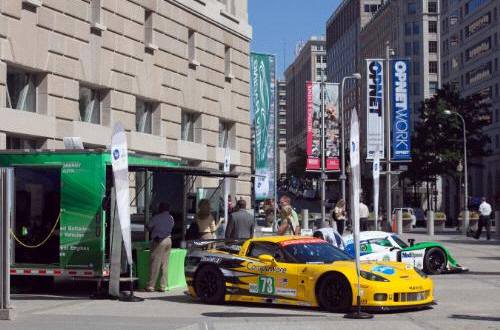 The American Le Mans Series (ALMS) reported it reduced petroleum usage by nearly 50 percent in its most recent race, as examples of their Green Racecars lined Pennsylvania Avenue in Washington, D.C. yesterday.
Advertisement

"Ten days ago at Road America, renewable fuel use by our race cars reduced petroleum consumption by 48 percent compared to traditional all-petroleum racing fuel," Series president Scott Atherton said to journalists and government officials in Washington at the National Press Club. "According to the Department of Energy, if such a result was translated to the U.S. vehicle fleet, the nation could decrease imported oil dependency by half, saving $175 billion every year inside our economy."

The point of all this is to allow auto manufacturers to develop and test energy-efficient technologies for tomorrow's consumer vehicles. The ALMS and industry partners are now looking toward pursuing development of new standards for what will be known as Green Racing.

Green Racing was developed along with the U.S. Department of Energy, the U.S. Environmental Protection Agency and SAE International.

To qualify as Green Racing, a racing series must allow for the use of renewable biofuels; multiple engine, fuel and powertrain configurations, as well as regenerative energy technologies.

Green Racing is also supported by MICHELIN through the MICHELIN GREEN X Challenge – a competition within all ALMS races rewarding teams that go the farthest and fastest with the smallest amount of energy consumed.

"In order to remain the Global Leader of Green Racing, the ALMS will keep moving forward,” Atherton added. “We expect to soon have manufacturers and teams competing with new alternative fuels, both bio-based and Compressed Natural Gas. Our rules makers are actively working with auto manufacturers and government officials to reduce the total energy consumed by the cars. Among the options are percentage reductions in fuel allocations over time and total energy allocations as early as 2014. We intend to work with our partners, teams and manufacturers to move toward turning these goals into reality.

"The automotive industry's most important race today is not Daytona, Indy or Le Mans. The new race is defined by global concerns for energy supply and climate change. The great race of the 21st Century is for economic, socially responsible, sustainable transportation solutions, and we are proud of the role we have in that race."