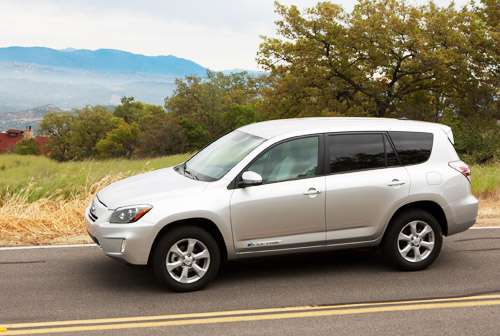 The Toyota RAV4 EV, the first all-electric SUV to be produced, was revealed today at the Electric Vehicle Symposium in Los Angeles with a range of 100 miles and a 240 volt/40 amp charger, capable of a complete recharge in six hours.
Advertisement

The manufacturer claims the RAV4 EV performs as well, if not better, than its gas powered brethren using a fuel efficient V6. Fully-equipped and base priced at $49,800, the RAV4 EV intends to deliver everything the conscientious buyer would expect from a modern SUV.

“It’s all about blending the best of two worlds,” said Bob Carter, group vice president and general manager of the Toyota division. “The all-new RAV4 EV marries the efficiency of an EV with the versatility of a small SUV – in fact, it is the only all-electric SUV on the market.”

A delightful consequence of Toyota’s collaboration with Tesla Motors, the RAV4 EV was inspired by Akio Toyoda, president and CEO of Toyota Motor Corporation. In only 22 months after announcing the project, Toyota and Tesla engineers have brought this revolutionary vehicle to market in record time.

Based upon Toyota’s most popular SUV model, the RAV4 EV features a battery and electric powertrain designed and produced by Tesla. The joint team aimed at redefining the customer experience with advanced charging options, interior comfort and interactive display. The vehicle was built to maximize ease of use and driving range on a single charge.

The front wheel drive RAV4 EV provides two different drive modes – Sport and Normal. In the Sport setting, the vehicle will accelerate from zero to 60 mph in just 7 seconds with a top speed of 100 mph.

Normal mode gets into the green groove, getting from zero to 60 mph in a restrained 8.6 seconds and keeping it legal with a top speed of 85 mph. Maximum output from the electric motor is 154 HP or 115kW @ 2,800 rpm.

As a rule, electric vehicles provide a remarkably quiet, smooth and extemely stable ride thanks to a lower center of gravity and the RAV4 EV is no exception. The new Toyota also has the lowest coefficient of drag of any SUV in the world at 0.30 Cd. The front bumper, grill, side mirrors, rear spoiler and under carriage have been redesigned to enhance air flow about the electric vehicle.

Compared to the standard gas powered model, the EV’s positioning of the battery pack low and mid-vehicle, is said to create a more sedan-like ride.

One remarkable feature comes in the LED low beam projector headlights with halogen projector high beams and an innovative leveling system allowing the operator to redirect the headlamps when the vehicle changes pitch from a heavy load.

On the inside no vehicle space was lost to electric vehicle components with interior cargo space still the same at 73 cu. ft. Front seat heaters extend warmth to the driver and passenger’s upper back.

Dominating the interior, an eight-inch state of the art touch screen, provides navigation, telematics and vehicle drive information and settings specific to the RAV4 EV. The dash display color radiates red when in sport mode and blue in normal driving mode. A new Neutron fabric, with a subtle blue sheen accent, is used for seat inserts and door trim.

Only 2,600 units are expected to sell over the next three years, but that could be a very conservative estimate. The battery warranty is 8 years or 100,000 miles.

“We believe that the RAV4 EV will attract sophisticated early technology adopters, much like the first-generation Prius,” said Carter. “It’s designed for consumers who prioritize the environment and appreciate performance. We look forward to seeing how the market responds."

Sometime this summer the California sun will rise to illuminate a brand new day – the day the first Toyota RAV4 EV will silently roll off a showroom lot with a new owner. Will it be you?