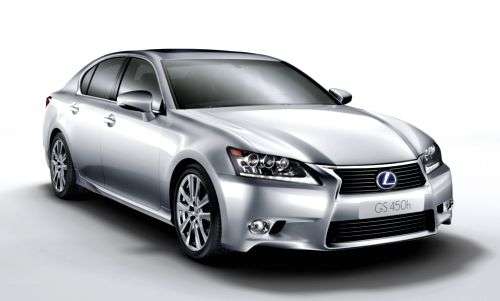 The Lexus GS 450h was the world’s first hybrid executive sports sedan at its debut in 2007, but returns at the 2011 Frankfurt Auto Show for the 2013 model year with a second generation hybrid drive system and an Atkinson cycle V6 gasoline engine in a front-engine, rear wheel drive vehicle.
Advertisement

The second-generation Lexus Hybrid Drive system in the 2013 Lexus GS 450h was designed to engender reductions in fuel consumption and emissions, while still providing an exhilarating driving experience.

The 2013 Lexus GS 450h accelerates seamlessly from 0 to 60 mph in 5.6 seconds thanks to its combined power output of 338 hp. Simultaneously the fuel efficiency has improved by more than 30 percent. Further, the 2013 model should qualify as a Super-Ultra Low Emissions Vehicle II (SULEV II). The new GS hybrid also features a Drive Mode selector, allowing the choice between Eco, Sport S, Sport S+ and EV drive and suspension settings.

“The all-new GS 450h will provide our customers with an exciting blend of performance and precision in a new hybrid package,” said Mark Templin, Lexus group vice president and general manager in the U.S. “With its dynamic exterior styling, roomy interior and advanced technology features, the GS 450h further demonstrates Lexus’ mastery of the luxury hybrid.”

The Atkinson cycle engine is an internal combustion engine invented by James Atkinson in 1882. The Atkinson cycle provides efficiency at the expense of power density and is used in some modern hybrid electric applications, such as the Lexus Hybrid Drive.Compression is delayed in an Atkinson Cycle engine, because the intake valves close late, creating a higher expansion ratio with less compression. This reduces intake and exhaust energy losses and converts combustion to engine power more effectively. Such engines are already in use in the Lexus CT 200h, HS 250h and RX 450h, as well as the Toyota Prius and Camry Hybrid. Other manufactures also use the Atkinson cycle engine in their hybrid vehicles.

The Atkinson is hitched to a compact, high-output, water-cooled permanent magnet electric motor. Both the engine and motors drive the rear wheels independently or in tandem, as needed.

The 2013 Lexus GS 450h also includes a generator; a high-performance nickel-metal hydride battery; a power splitter that via planetary reduction gears, combines and routes power from the engine, electric motor and generator in accordance with operational requirements while a compact power unit controls the high speed interaction of all these components.

Engine noise, vibration and friction have been lowered through the adoption of lightweight chain technology. Regenerative braking has been enhanced, contributing to further improvements in fuel efficiency. The battery layout has changed to a new, stacked configuration maximizing luggage space and allowing the 2013 Lexus GS 450h to have even more cargo area than the previous generation of gas models.

All the Lexus second-generation GS hybrid models have a new platform designed to be more rigid than previous models. Extensive platform testing resulted in more spot welds and laser welds in specific locations. Along with a revised suspension design, the wider track assures a more solid stance and excellent cornering performance.

All that and the 2013 Lexus GS 450h gets a makeover as well, giving it a sleek, aerodynamic, yet fiercely aggressive countenance.

It won’t be easy waiting to drive one of these.