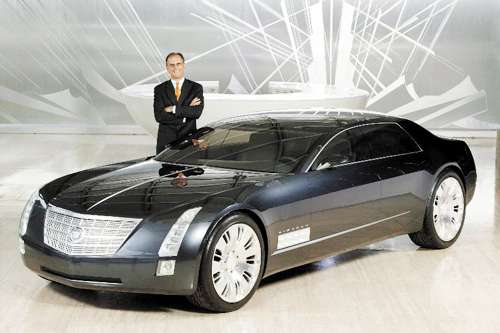 The one and only 2003 Cadillac Sixteen ever built will be on display at the 2013 Amelia Concours d’Elegance, a shining example of GM’s engineering expertise as the only V-16 engine built in this millennium.
Advertisement

The stunning design cues of the Sixteen have shown up in the Cadillac lineup over the years, as rumors repeatedly hinting at a select few of the super-flagships being built surfaced during the last decade.

"We wanted a super luxury flagship," said Wayne Cherry, the retired Vice President of GM Design who led the Sixteen design project. "The Sixteen had to have a presence. We wanted it to be the ultimate expression of Cadillac; to reinstate Cadillac as a world leader in design and technology and a reminder of the heritage of Cadillac."

The concept's breakthrough Displacement on Demand system only utilized all 16 cylinders for pedal-to-the-metal acceleration. For maintaining highway speed it only used four of the pistons and just eight for normal city acceleration. This ability gave the seriously overpowered luxury car 21-mpg on regular fuel – brilliant!

Amazingly the vehicle had only a four-speed transmission – with one of the amazing 8-speed automatic transmissions available today, this car would likely have set performance records worldwide. Notably the long, lean looker has four wheel steering to help it maneuver through the urban landscape.

Other notable design features included a solid crystal Cadillac logo in the steering wheel and a Bulgari clock in the dash.

The 2003 Cadillac 16 Concept will not only be the star of the Amelia Concours d’Elegance, it has been a star of film and television as well.

James May of Top Gear reviewed the Sixteen during the 10th episode of the second season of the popular auto show in 2003.

In 2006, the Sixteen appeared in the Adam Sandler vehicle Click, about a truly universal remote control. The Cadillac Sixteen was driven by his character when he visited the future in 2017.

Additionally, the Sixteen appeared in the 2011 film Real Steel, starring Hugh Jackman. When Charlie Kenton meets with his son’s mother and rich step dad in the early storyline to collect his money for relinquishing custody of Max, the couple is riding in the Cadillac.

LG's New EV Battery Plant Is a Welcome News for Tesla
Tesla Giga Berlin's New Hurdle: It's Not Only the Gov't, but Now Tesla Itself
END_OF_DOCUMENT_TOKEN_TO_BE_REPLACED