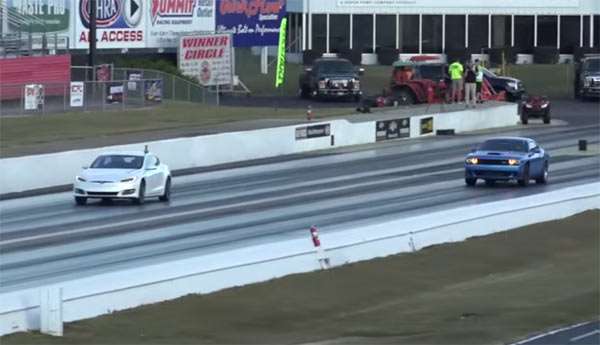 Watch A Tesla P100D Up Against A Dodge Hellcat In A 1/4 Mile Drag Race. Who Will Win?

Check out this video where you see a Tesla P100D take on a modified Dodge Challenger hellcat. Which do you think will win?
Advertisement

The setting for this little quarter-mile drag race is at Atlanta Dragway, which features a New Tesla P100D driven in Ludicrous mode and a modified Dodge Hellcat (not specified) with a pulley swap, tune and pro drag radial tires. The outcome may be expected or not, but the Tesla wins out right which is both dismaying and heartening at the same time.

I say this because I love how the Tesla is now pushing the boundaries in the EV market and possibly showing us the future of electric performance and vehicles in general, but I also love the might of muscle cars and particularly the Hellcat, with its 707 HP V8. Although the Tesla has instant torque, whisperingly fast speed and is undeniably the future course, the Hellcat still has that special something with the roar of its V8 and visceral feel. Sound and feel is important to us humans and sometimes that's more of a priority than clinical technology.

One take away from this video is that a drag race is only one variable when it comes to comparing two such different vehicles. An EV vehicles will always be quicker off the line with its instant torque, while an ICE vehicle takes more time to get up to speed, but will get there in the end (It would be interesting to see the results over a half mile or full mile). Also, the raw feel of a muscle car is the attraction, that is why they've stayed around for so long. Reviews may say the old to the new muscle cars may be overpowered and not handle the same as some of their sports contemporaries, but no one comes away without a smile on their face after driving a muscle car and for the power and performance, the muscle car is still great value.

Also, don't think that the muscle car is going to be resigned to the history books in the next few years. There is still plenty of life left in the species, even if gasoline is swapped out ultimately for juice that is something more eco-friendly. I think grassroots racing up to the most highly modified ICEs will also have something to say on this point in the long run.

So, you can treat this video like comparing apples to oranges, EV to ICE which are completely different technologies or a clear indication of the way vehicle performance is now going. I love the Tesla, but I also wanted that Hellcat to win so badly.