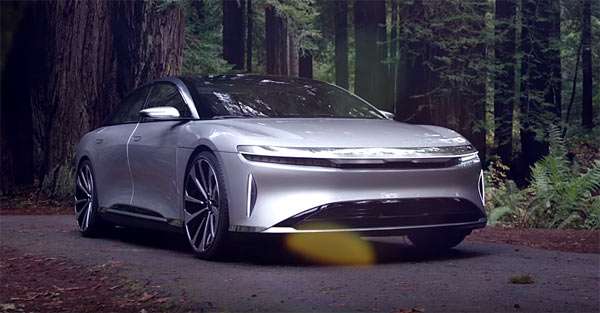 Lucid Motors unveil their competitor to the Tesla this week with performance, comfort and a passing similarity to their rivals. But will this new competitor be able to take on Tesla's crown?
Advertisement

“The new era of luxury mobility starts here,” stated Lucid Motors from their prototype shop in Fremont, CA, who were formerly known as Atieva. Their new model named the 'Lucid Air' claims to have everything you need for a truly modern vehicle which include being a fine daily driver, luxury vehicle and a 1000 Hp to take on the sports car market.

The similarities with the Tesla model S is no coincidence as Peter Rawlinson who was once Tesla's Model S chief engineer is now the chief technology officer at Lucid and the 300 strong company also boasts few other Tesla employees. The team also includes designer Derek Jenkins who previously worked on the Mazda MX-5 Miata. Maybe adding a bit of insult to injury, the launch of the Lucid Air was just down the Freeway from Tesla's lair, but the Lucid plans to take the EV market even further than ever before with new advancements and pushing the boundaries of the technology.

A bigger and better electric car?
If the electric vehicle market is to move forward at any significant rate, there has to be a healthy rivalry between makers to push the boundaries and this now seems to be the case. The sumptuous curves of the lucid is inspired by luxury jets, with a hyper modern exterior features such as the thousands of tiny lenses in the 10 individual headlights which pivot to follow the car.

The interior would please any luxury car being around the same size as a a Mercedes E-Class, with loads of legroom and being fully electric, has all the modern conveniences you would expect. You also get a glass canopy roof, flush door handles and being all electric, a front and rear trunk.

“We wanted something that was long and low and sleek, something that could really pierce the air,” Jenkins said. “It’s almost like a liquid-metal aesthetic.”

Two electric motors in the front and the back provide the car with 1000 hp and a possible 300 mile range from a 100-kWh battery pack. This provides a 0 to 60 mph time of 2.5 seconds. A 130-kWh battery pack is in the works which will push the range to 400 miles, further than any present EV vehicle. The car boasts an 'inter-systems spatial optimization' which translates to a multi-link rear suspension, switchable volume inverted air-springs and active damping, which is to increase interior space for things like jet style reclining seats. Autonomous driving is also in the works with panels on the front and the back of the car hiding cameras and sensors, but full autonomous driving will be for future releases at this point.

The company also seems to have a healthy future being backed by LeEco, a Chinese technology company and a partnership with Samsung to supply the lithium ion cells for each vehicle. The amount of funding has not been disclosed, with possibly more money to be raised in the next year a spokesman stated. Electric vehicles are a costly business, so we wait to see how this trickles down to the final vehicles.

So, how much will this new wonder of the EV market cost?
The limited edition Lucid Air but be on sale for $160,000 said company Director of Marketing Zak Edson. Full production models of the Air will possibly be around $65,000, and a standard model $85,000.

Production from their plant in Casa Grande, Arizona should start from late 2018 and hope to produce up to 130,000 vehicles every year.