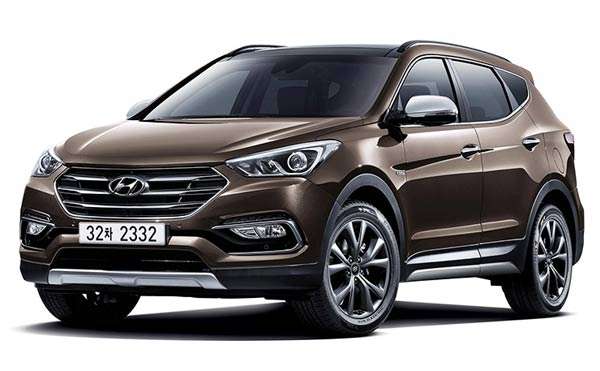 Hyundai Motor announced the release of a new 2018 Santa Fe sports for 2018. What to expect from its exterior and what changes have been done on the 2018 Santa Fe.
Advertisement

Hyundai Motor have definitely been keeping tongues wagging recently with sightings of a few of their new models being tested on the road recently, implying new designs in the works. The first to fully show its face is the 2018 Santa Fe SUV announced on Monday.

The model has been around for some 15 years with the last redesign in 2013, but many said at the time that the upgrades could have gone a lot further. Currently, it seems that a subtle facelift is one of the key upgrades along with enhanced functionality in the safety department. Part of the equipment being upgraded includes blind spot detection (BSD), parking assistance system (PAS), 8 inch screen and smart power tailgate.

The exterior has been given a nice blend of straight lines and curves which are not overt, or neither bland, but there is really little else at the moment giving an idea of what potential buyers will have in store as per the news from the Koreatimes.

Although the 2018 model is getting a freshen up, many online reports say that the biggest upgrade will be in 2019, with the biggest changes in the mechanical side and the exterior. The 2018 model will have a a 2.4-liter engine with 185hp and 178lb. ft. of torque, dropped from 190 horsepower and 181 pound-feet in 2016, but a Sport 2.0T model should have a turbocharged 2.0-liter engine with 240 horsepower and 260 pound-feet of torque. Again, a drop from the 2016 models, but with a lower rpm peak helping throttle response and the low range without affecting acceleration.

All models should get Hyundai’s Drive Mode Select system and AWD, which will focus power to the front wheels for the majority of the time and then shift power to the rear wheels when the car detects any tire slip or rough terrain. This will also include Active Cornering Control, which will help in cornering by adding power to the outside rearwheel and breaking the inside rear wheel when cornering.

If you're completely set on getting a brand-new Santa Fe this year, then the small additions could be justifiable, but the company do have stiff competition in this market from the likes of the Ford Escape and Edge, Jeep Cherokee variations, Mazda CX-5 and the Kia Sportage for the five passenger versions. The Ford Explorer, Dodge Durango, Honda Pilot and Toyota Highlander come into the mix for the seven seater versions.

Hyundai are clearly pushing the SUV side of things in the next few years with new upgrades models in the pipeline, but the 2018 Santa Fe might just be the stopgap needed before major upgrades.