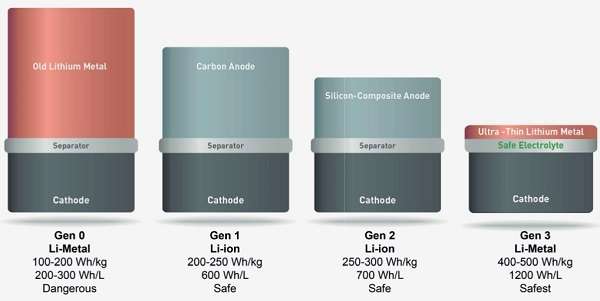 Story of a Tesla Fanboy's Fascination With The SolidEnergy Battery

Super batteries for electric cars are announced and crash and burn within weeks of the announcement. Many of them are "laboratory batteries' with short lives, high costs, and impossible to scale up for commercial manufacture. But consider this announcement. In spite of myself, I’m a little excited about it.
Advertisement

“An MIT spinout is preparing to commercialize a novel rechargeable lithium metal battery that offers double the energy capacity of the lithium ion batteries...The battery essentially swaps out a common battery anode material, graphite, for very thin, high-energy lithium-metal foil, which can hold more ions — and, therefore, provide more energy capacity. Chemical modifications to the electrolyte also make the typically short-lived and volatile lithium metal batteries rechargeable and safer to use. Moreover, the batteries are made using existing lithium ion manufacturing equipment, which makes them scalable.” That’s from the MIT news, written by Rob Matheson on August 16, 2016.

This means that you could conceivably have a Tesla S with 630 miles of range. Wow! How about a model 3 with 430 miles or range rather than 215? The mind spins with the possibilities. Elon Musk in his new long-range plan talked about Pickups, (they need a lot of power and range), and Semis to truck our needs across the country. Power and range are absolutely necessary for cross country hauling. And torque. It is well known that Tesla’s pull from standing better than ANYTHING! The new P100D is officially the fastest production car in the world at 0-60 times of 2.5 seconds. Think what that torque would mean to move those trucks from stop. Consider the humiliation of losing a stoplight drag-race to a semi with a loaded 80 foot long trailer. Unacceptable! Better get a Tesla!

Is Tesla considering this chemistry? Maybe. One of my favorite podcasts is “Talking Tesla”, (ya could look it up on i-tunes or android and I urge you to do so, they’re great). In a recent broadcast Robert said that when he went on a tour of the new battery Gigafactory which is under construction, he saw a big, big machine covered with a tarp. A Tesla employee was heard to say that it laid down lithium on a foil! Hmm.

Tesla’s chief technology officer, (CTO), J.B. Straubel has said many times that Tesla will use the best technology, and Saint Elon, (I’m a fanboy), has stated that if there is an advance in batteries that they would be the most logical place to come to since Tesla builds and uses the most batteries of anyone, and when the Gigafactory is in full swing, they will be the biggest manufacturer in the world of said batteries.

There are big advantages to the SolidEnergy battery other than capacity/energy density. The lithium metal foil is coated with a solid electrolyte that doesn’t need to be heated to function. (No ghost losses due to keeping the battery warm on those cold winter nights). They also invented a quasi-ionic liquid electrolyte that doesn’t burn. Now not many Teslas have burned, but in a huge crash, they do burn...look at the Dutch S which went off the road while traveling close to 100 miles per hour. It burned. I mean a gasoline powered car probably would have exploded. It definitely would have burned. It would be a feather in Tesla’s cap to have a car which Does. Not. Burn. Unless somebody dumps a barrel of gasoline on it and lights a match.

So, the complex cooling systems that Tesla engineers have developed to keep the battery pack from overheating should also no longer be necessary. More cost savings?

Like I said, I’m excited, and waiting. How about you?