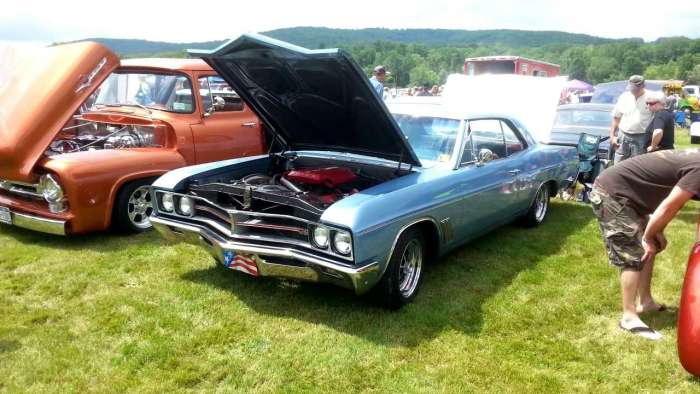 10 Reasons Why Car Shows Are My Favorite Summer Activity

There's a difference between going to a car show, and experiencing a car show. The experience of a car show is one of my favorite things to do in the summer time. Here's 10 things I love about a car show.
Advertisement

1. The Preparation
The day before a car show is usually packed with a full day of detailing, especially if it's before a big show (large number of participants / spectators). Nothing tops spending quality time with your show car. Getting it washed, dried, adding a coat of wax, vacuuming, and just making sure everything is clean gets you energized for the show the next day.

2. The Morning Of
Waking up bright and early and having your morning coffee before getting out the door, with your tote bag of all your favorite car care items in hand, ready to bring home the gold. You start wondering on the drive, "What cars are going to be there? Anybody I recognize? How many people will be there? Will we get good parking?" I always go to shows with my grandma and her '67 Buick, so sometimes her and I will have conversations about whatever her and I ate for breakfast, or talking about past car shows, or the past in general.

3. The Arrival
Here it is, this is what you got the car all cleaned up for. You grab your cleaning kit and get all the stuff from the road cleaned off the bumpers, wheels, windshield and anywhere and everywhere there might be dirt. Sometimes that quick coat of chrome polish adds that little extra shine you want on that shiny chrome. Taking a walk around the car, looking at it from all different angles to make sure you didn't miss a spot and making sure the car looks great from every angle gives you that last bit of confidence that you've done the best you can, and now it's in the hands of the judges.

4. The Spectators
Sitting in the folding chairs, watching everyone walk by your car and hearing "nice car" is an awesome thing to hear. Sometimes you have people come up to you and they tell you stories about a car they used to have or you hear about how they had the same car in high school is equally just as cool. I've met some very nice and interesting people, and the stories are just as interesting.

5. Spectating
Taking a 10 minute break from sitting and walking around looking at everyone else's car can sometimes give you an uneasy feeling. "Maybe the car isn't good enough to win". Maybe you just might run into someone who has a unique car that you've never seen before and you have to go start a conversation with them. Sometimes their personalities are just as unique as the car. Sometimes you run into an old friend, or someone you've become accustomed to seeing at other shows. I don't know about you, but I love seeing familiar faces at car shows.

6. The Pictures
Of course you take a picture of your show car sitting in the field looking pretty and all, but you make memories of the show you went to and get other pictures. Sometimes you run into a car that a loved one or close friend admires, so you snap a couple pictures so you can show them. Other times it's that sweet-looking rat rod that captures your eye and you have to get a picture. They make great conversation starters with other car enthusiasts!

7. The Vendors
Every car show usually has vendors set up somewhere. Whether it be individuals selling old car parts or collectibles, to small businesses with custom made T-shirts that offer to put your favorite picture of your car on a shirt for you. I've seen some of the coolest things at car shows. Not to mention the food trucks! Nothing tops a burger and fries with an ice cold drink from a food truck. You don't know how, but somehow it tastes better sitting in the chair behind the show car you brought.

8. The Awards
Here's the big moment; the presenting of the awards. Sometimes you just want to know if you won or not so you can beat the crowd of people. It's also nice to hear when that old friend or the car you wanted to win actually get a trophy. When you get called for an award, it makes all that effort and cleaning you did so worth it.

9. Afterwards
Depending on where you parked, you realize why modern cars are such a blessing; air conditioning. Those old vinyl seats can get really toasty, and it's not what you really want to endure, but you do it anyway because you're tired and want to get home. If you won, you celebrate the victory in the only way possible; taking pictures with the trophy. Sometimes you take a picture with the trophy in the drivers seat, or sitting in front of the car, or you get your picture taken. It's not after the picture is taken that you realize how sunburnt you got. Sometimes my grandma and I will even stop for a scoop of ice cream after the show.

10. The "Car Show Coma"
Then you deal with what I call the "car show coma". You don't know how, but if you've ever experienced it, you know how tiring a car show can be. You can't really explain it to people, but a car show is actually very exhausting. It doesn't seem like sitting in a chair for 4 hours would be, but it's always an exhausting day for my grandma and I. But overall, I wouldn't trade it for anything in the world.

If you love something else about a car show or agree / disagree with any of these, leave a comment below! I know I'm not the only one who goes to a car show.