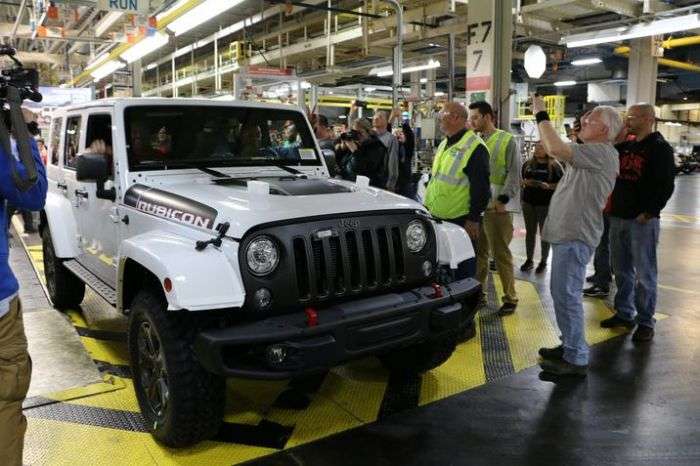 Jeep workers in Toledo, Ohio, have finished production of the popular 2018 Jeep Wrangler JK model. It has been a spectacular run for the workers who are seeing record sales of Jeep vehicles. While the workers are sad to see the JK model die, they are excited about the new product that they will be building soon.
Advertisement

Usually, it is melancholy for workers to see the last of any model roll off the line. More than 2.1 million Wrangler JK models have been built in Toledo, since production began in 2006. The Jeep workers are celebrating the end of 2018 Jeep Wrangler JK, because an even more exciting vehicle awaits.

The Toledo Assembly complex has been going gangbusters for the last few years. In March, the Jeep brand saw total sales increase 44 percent, setting a monthly record. Jeep Wrangler had its best month ever with 3,839 vehicles sold. The workers at Toledo Assembly have been building the Jeep Wrangler JK as well as the new and improved 2018 Jeep Wrangler JL. Now that the JK model has ended production the plant will be retooled to build the long-awaited Jeep truck.

Chuck Padden, who manages Toledo Assembly says, “This workforce has been working practically non-stop for the past several years to fulfill the dreams of Jeep enthusiasts around the world who want to go where only a Wrangler can take them. We take great pride in the role we have played in the history of this vehicle and the impact it has made in the Toledo community. We look forward to bringing that same commitment to the all-new Jeep truck.”

America has gone truck and SUV crazy. FCA announced previously that it was dropping several car models to focus on the hot-selling trucks and SUVs and now Ford is doing the same.

Fiat-Chrysler announced back in 2017 that it would build the new Jeep pickup in Toledo. Jeep fans have been begging for a pickup for years. The truck is expected to be based on the all-new 2018 Jeep Wrangler JL, that is also built at the facility. The JL is seen as a big upgrade over the previous version. It is 200 pounds lighter because Jeep is now using some aluminum in the body. It has a much nicer interior and includes most of the latest bells and whistles like Fiat-Chrysler’s Uconnect infotainment system. It also has the coolest windshield that folds open. Along with all of the upgrades, the 2018 Wrangler JL still keeps the rugged underpinnings and axles that Jeep aficionados love for off-roading.

Dealers are expecting to see the new as-yet unnamed Jeep truck as soon as April of 2019. The shutdown of the Wrangler JK line gives Jeep a year to retool that area of the plant and get it up and running. Although, FCA has confirmed that they are building the Jeep truck, its design hasn’t officially debuted. We may see it at the Los Angeles auto show, if not Detroit.

It certainly gives the Jeep Toledo workers something to celebrate, the end of one great line and the start of another.